Yes, I actually have a new card. Only took me two weeks to make it. Oh, not actually--I spent most of those two weeks reading some crazy books and catching up on TiVo. Anyway, I made a card for our sister-in-law, Wendy, as her birthday is next week. She lives in rural Minnesota, which is lovely in the summer and not so much fun in the winter! When she retires she hopes to come to Arizona in the winter to get out of the cold, and, of course, go back to Minnesota in the summer to get out of the desert heat. Best of both worlds.

This has been Restaurant Week in the Phoenix area. It started last Saturday and ends this Sunday. We decided to try some new places that were participating in providing specials for the week. Last Saturday we went to Posh in Scottsdale. This is an "improvisational" restaurant; they don't have a set menu. After you are seated, you fill out a card telling the staff if there are any proteins they have in their kitchen that you do not like. You also list any other foods you are allergic to or have a strong aversion to. OK, so I crossed off frog legs, soft-shell crab, foie gras, and lamb. I should have crossed off short ribs, as I don't really like them either, but I felt I was being too picky. Then I added "beets" to the list of things I could not eat, (beets literally make me gag).

We both ordered a glass of wine from the chef's recommended list and were very happy with what we got. Then it was on to the food. The first bite was an 'amuse bouche' of coconut ricotta with mango puree. Just one bite, but oh so good! Next was the first course and we received soups: I had a yummy leek soup and Gary had a delicious chilled carrot-ginger concoction. So far, so good. That came to a rather abrupt halt, though, as my next course was an improv disaster. They served me a wonderful scallop on a bed of BEETS, with BEET juice, and a small onion. I told them I hated beets, and they served them to me. What????? I should have sent it back, but I hate to make waves at restaurants, so I gagged down the beets. Then I took a bite of  the scallop, which was wonderful. And then I made the mistake of putting the onion in my mouth. It was RAW, People, RAW ONION! With a delicate scallop, it was a gastronomical disaster! I chewed the onion as fast as possible. Gary said I should have spit it out, but I thought that would gross out everybody around me. So I swallowed it--no easy feat, believe me! And found that I could no longer taste the rest of my scallop. The onion totally killed the scallop flavor. AAAARGH! Giant misstep on the chef's part, in my humble opinion! BTW, Gary's course was a yummy bowl of mussels and broth. Now why couldn't they have given that to me? Huh?

I figured that the next course would be short ribs for me, since I neglected to cross them off my list. Sure enough, that's what I got. And they were 'meh'. Edible, but I certainly couldn't rave about them--at least they removed most of the fat and deboned the meat. Gary had a lamb dish that he absolutely loved. OK, so next we had a cheese plate that Gary had ordered as a side dish. It was wonderful--great cheeses, delicious toast points, almonds, and figs. Success. The last course was dessert, which I had with a glass of great Muscat. I honestly cannot remember what was in my dessert, except that I inhaled it and nearly licked the plate clean. It was soooo good, and Gary enjoyed whatever he had as well. The bill came out with two small bags of mini-cookies to take home with us. (They were exceptionally good also.)

Gary had nothing but a great experience with Posh. Me, not so much. Some super hits and some nasty misses. I would go back again, but I would be very insistent about my "do-not-serve-me" list next time! (I will include raw onion with the beets!)

Sunday we went to Black Chile Mexican Grill in Phoenix. Now their menu had choices for three courses and included a Margarita. What they neglected to say on the menu was that you had to share your appetizer and dessert with your dinner partner. Cheesy, if you ask me. I'm sure that was because you got a free drink with the meal, but still. Gary asked the waitress what they would serve him if he came by himself. And she said they would give him all three courses. So it didn't make sense that a couple would have to share, but, oh well...

The Margaritas we had were quite tasty, as we ordered ones with upgraded tequila. Our first course was guacamole and chips. Now, there is guacamole, and then there is guacamole. This was so average. Good, but very average. If you really want great guac in this area you can get it at The Barrio, The Mission, or even Cantina Laredo. Don't expect it at Black Chile, OK? I ordered the Red Snapper tacos for my main course--which came with borracho beans and sticky rice. Sticky rice? At a Mexican restaurant? But, I'll tell ya, it was really good; it had corn and other bits in it and such a great flavor! The beans were also very good, as were the fish tacos. So I was very happy with my main course. Gary had chicken fajitas and he said they were good, but he didn't rave about them. Dessert was whipped cream served with a scoop of fried ice cream. Good grief! We left half a bowl of whipped cream after we shared the scoop of ice cream. Not impressed.

Overall, it was an OK meal, but I won't be rushing back there to eat again. There are too many exceptional Mexican restaurants in the Valley of the Sun to choose from, and Black Chile just isn't one of them.

Our third eating adventure was Tuesday night. We went to Petite Maison in Scottsdale, which was voted one of the best new restaurants in 2010 by Phoenix Magazine. They were serving wine with each course as part of the "special" dinner. You could upgrade to better wines, but we chose not to. Good choice, as the three different wines we had were very good! They start you off with a petite popover, which was just too yummy. I could have eaten a baker's dozen! Our first course took a very, very long time to get. Like 45 minutes. I was almost ready to walk out when they served us. The waitress apologized, saying that my scallops, (yes, I got them again, are you surprised?), were not prepared properly so she made them restart the order. I was OK with that, but it would have been nice to have had a "heads-up". My scallops were absolutely delicious (and were not served with a raw onion)! Gary had a smoked salmon crepe, which he loved. The sommelier gave us a little extra wine for the first course since we had to wait so long for our food. That was a nice touch. And then he gave us a complimentary glass of the upgraded, second-course wine to try. I had the monk-fish wrapped in prosciutto and served with beans for my second course. Gary had steak topped with crab-meat and served with asparagus. Both of us were extremely happy with our meals. For dessert, we were each served a Nutella souffle. OMG! Just to die for!

Overall, the meal was fantabulous, in spite of the glitch with the first course. We will definitely go back there. Hopefully sometime soon! :^)

Tonight we are going to try Iron Chef Jose Garces' new restaurant, Distrito. The menu looks very intriguing, and it is the Mexican restaurant I wanted to try this week. (Gary called Black Chile, not knowing that I was hell-bent on eating at Distrito. Ergo, we get to try both! HAHAHA!) I will try to remember to blog about it next week.

Back to Wendy's birthday card. I chose a Mayzy digi, Bibi Balloons, to print out on Cryogen CS. My color scheme was selected using Basic Grey Euphoria and Indie Bloom patterned paper. I paired these with Stampin' Up CS. I used bling from MS Birthstone Gem Stickers, flowers from Wild Orchid Crafts, and some miscellaneous ribbon I had in my stash. The sentiment is from SU Occasional Quotes and is punched out with a SU Modern Punch. I used Glossy Accents on the balloons and Bibi's mouth, eyes, earring, and bracelet. Star Dust Stickles were applied to the Spellbinders die-cut leaves, the Cheery Lynn die-cut Fanciful Flourish, and all the bows in the image. Copic Opaque White was used to accent the image. Finally, the image was colored with the following Copics: B0000, B000, B32, B34, Y11, Y15, Y18, V000, V20, V22, V25, R000, R81, R83, R85, E000, E00, E11.

I am entering this card into:

I'm wishing Wendy a Happy Birthday next week, and hoping everyone everywhere has a wonderful weekend! 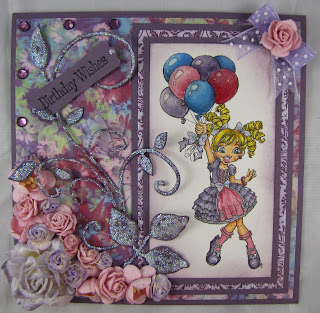