Well, first I have to update you on my sister, Merrilyn. Her oral surgery went "like clockwork", according to her dentists. But she was in lots of pain Wednesday night. She said the Vicodin didn't help, so that must have been some major  pain she was feeling. I stopped over on Thursday to give her the get-well card I made for her. She was still in pain, but the Vicodin seemed to be easing it better for her. Unfortunately she cannot chew anything for several days, so she is on a soft diet. Yuck. I would have a really hard time with that one, I tell ya! She's a real trooper, and Ron took good care of her on Wednesday. (Of course, by Thursday he was back to giving her a ration of crap. So what else is new?) And today she is feeling so well that she doesn't need the Vicodin. She even went swimming this morning. Oh, she told me to mention that she and her hubby really enjoyed the card I made for her. Add a big grin here.

Oh, and an update on the dog. He has to have physical therapy for his knee condition. Yes, that's right. Physical therapy. And it's not cheap! The initial visit, which is next Tuesday, will cost $125. Each visit thereafter is $50. And I have no idea how many visits this is going to take. Apparently, he needs to strengthen his muscles to hold his kneecap in place. And the therapy takes place in a swimming pool. A swimming pool? ROTFLMAO! (For those of you too refined to know what that means: Rolling on the floor laughing my a** off.) I repeat, a swimming pool? Donovan hates water. How in the heck are they going to get him to swim in a pool, pray tell? And I am supposed to continue his therapy at home. Since we don't have a pool, he needs to swim in the bathtub. OMG. I can see it now. It will be like a Three Stooges' skit. (Again, for those of you too refined to know them: the Three Stooges were a slapstick comedy act.) And I'll probably fall into the tub on top of the dog, drowning both of us. Pray for me. Please.

Gary and I bowled on league last night. I must say, I have a new sport to despise. I am getting progressively worse each week. I thought you were supposed to get better with more practice, but I seem to be going backwards. That. is. not. fun. (Need I say more?) Heavy sigh...

On the bright side, the U.S. Open is happening this week. I watched as much of it as I could squeeze in yesterday. So many fantastic golfers are duffing it around the course in San Fran. Goodness. Glad I've never played that course. Come to think of it, I'm glad I don't play any golf courses. Yeah, that's a sport I gave up for Lent a few years ago. And I'm not even Catholic. If my bowling doesn't improve soon, I may give that up for Lent, too--a year in advance! That makes no sense, does it. Tough.

Anyway, I will be watching as much of the U.S. Open as I can. I love it when the majors are played--there is so much more TV coverage of them than the regular tournaments. For me it's like being in hog heaven.

I realized this week that all Gary and I are watching on television this summer is reality TV. What the heck? How'd that happen? So You Think You Can Dance, Duets, Hell's Kitchen, Master Chef, Food Network Star, Design Star. It's a steady diet of unscripted programming. Well, mostly unscripted anyway. I want Game of Thrones, Mad Men, Merlin, Grey's Anatomy, and Hawaii 5-0 (among others) back. I need the drama, people. I don't have enough in my own life--I have to live vicariously through several TV series. Yeah. Pathetic. I know.

My friend, Catherine, is celebrating a birthday on Monday. So I concocted a card for this most auspicious occasion. She is turning 61. Just a baby. Anyway, she is from France, so I thought something French might be nice for her. I found some paper with the Eiffel Tower on it in My Mind's Eye Lost & Found Blush collection. Perfect. Especially since I had an MFT Eiffel Tower die to use as well.

OK, here is a total aside for you. When I was a kid in Whitefish, Montana, (oh, about a thousand years ago, before there was dirt), there was one fancy restaurant that was in town. Actually it was slightly out of town. But not by much. (Oh, there was another fancy restaurant north of town on Big Mountain, but that's not important to this tidbit, so just ignore it.) Anyway, we loved it when Mom and Dad would take us to this place, which wasn't often, since they were not rich people. And who the heck wants to take your kids with you when you go out for a nice dinner? But, my whole point here is that the name of this restaurant was entirely goofy. Well, no, that wasn't actually the name, but close. It was: drum roll please, Frenchy's Chinese Gardens. Now isn't that just the silliest name you ever heard of for a restaurant? Hey, it at least ranks right up there with Ruth's Chris Steak House. Which is really hard to say, btw.

Back to Catherine's card. I picked a digital Saturated Canary image, Ava, which I printed on Cryogen CS. My sentiment is a digi by Create with TLC, which I printed on Stampin' Up CS. I also used SU card stock for the rest of the card pieces and die cuts. The dies I chose were:  a Spellbinders leaf, a Marianne Designs leaf flourish, a Cheery Lynn French Pastry doily (still working on that French theme), an MFT Die-namics High Tea Party doily and an MFT Eiffel Tower, and a Cheery Lynn Deco B Lace Corner. The leaf pin, carnations, roses, and tulips are from Wild Orchid Crafts. My bow was made with my Bow Easy from SU ribbon. I added some tulle I had in my stash. I accented the image with Copics Opaque White. I added Stickles to the lace on Ava's top, the Eiffel Tower die cut, and the leafy flourish die cuts. I applied Glossy Accents to Ava's lips, eyes and balloon. Ava was colored with Copics: E0000, E000, E00, E11, E23, E25, E31, E50, RV000, RV17, RV52, RV55, BG0000, BG10, BG11.

I am entering this into the following challenges:

'K, that's enough of me today. Wishing everyone everywhere a fabulous weekend! 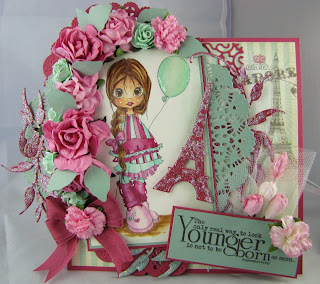