The "Eyes" Have It

This was the week of the eye. Truly.

First, Gary called me from Cedar Rapids, IA on Tuesday night to tell me that his eye went kaflooey while he was on the second flight up. He said that suddenly he started seeing flashes of light and had clear "worms" floating in his eye. Hmmm. I have had clear worms in my eyes for years, but they didn't come on suddenly. And the flashes disturbed me. So I told him to go to the hospital right away and get checked out. I wanted to make sure that he wasn't getting a detached retina. The ER doctor told him that he thought he would be OK until the next morning, when he could see the eye specialist.

One guess as to how much sleep either one of us got that night. Yeah, not much, for sure. But it turned out OK, as the doctor told him that he has posterior vitreous detachment (PVD), but there was no evidence of retinal tear or detachment. He is to see his eye doctor in a month to have his eye checked. Last night Gary told me he is getting used to the worms in his eye, so he is feeling much better about it. Which is a good thing. And pretty much everyone gets PVD later in life. I have had it for quite a while, not knowing the name for what caused the floaters in my eyes. :^)

Second, my brother, Larry, tells me that he had an eye exam on Wednesday and found out that he has Fuchs' Dystrophy. Hmmm. It is hereditary and causes major problems with the cornea--in fact, the treatment is corneal transplant. The good news is that he is nowhere near needing the transplant in the eye affected. I told him he would have to get a transplant from someone else in the family, because I have Cogan's dystrophy (map, dot, fingerprint) and he wouldn't want my corneas--they are not smooth, which is perfect for me. I am not a smooth person.

Third, I had my eye exam yesterday. I told you this was the week of the eye. Anyway, my exam went quite well. My maculae are fine and my retinas are still hanging in there. I did have a slight change in both eyes, so am getting new glasses. Insurance covers the prescription, but not new frames. Now I ask you, how is that possible? What in the heck are you supposed to do--send your current frames in to have new lenses put in? That takes three weeks. And you're supposed to do what in the meantime? Go about your business blind? I don't get it.

Anyway, I am getting new frames. I tried on several pairs of frames that have magnetic clip-on sunglasses. I refuse to wear my "old-lady" sunglasses, (which I wear over my glasses), anymore. I know I am an old lady, but I don't have to look like one. So there.

Back to the frames. One pair I tried on made me smile. And giggle. I took them off and thought to myself, 'Self, you can't possibly get those frames--everyone would laugh at you.' So guess what? You got it, I bought the giggle frames. Which turned into LOLOLOLOLOLOL frames when we were narrowing down the choices. I told Cindy, the gal at Aztec Optical, that these frames reminded me of a pair I had when I was very young. I think those frames were blue. I remember that, after wearing them for a while,  I didn't like the color of those frames anymore. There was no money at the time for new frames. But there was money for Penny to paint them with gold nail-polish. And paint them I did. I also remember the bows being a bit uncomfortable--kinda scratchy. But I wore them anyway, and thought I looked "cool". We laughed so hard about this that our stomachs hurt and our eyes were watering. Hysterically laughing. Really. Yeah, well, I guess you had to be there.

The new frames are not "gold"; they look to be a shade of purple. I hope. I actually thought purple and Cindy thought burgundy--which would never do, because burgundy is not in my color chart! So here's hoping they are purple, like I thought. Oh, gee, if they aren't purple, I may have to paint them with nail polish. Anyway, when I was telling Gary over the phone about the new frames, he asked if they were cat-eyes. Smart man. Yup. They are. Just like the ones I had in the early 60's. HAHA! So I expect some people will like them, and some people not so much. But they make me smile. And giggle.

I do not have a card to show today. I should have done one for the last week of Summer Card Camp, but after what happened last week, I lost my mojo. I guess I didn't tell you about that yet. Well, I tried to link my Week 3 card to the camp website, and I could not get it to link. I tried and tried and tried. No such luck. The last attempt I made got a link posted to the card camp colors of the week. Yeah, that looked cool. The logo for the camp where my card should have been. Actually I did sit and laugh about it for a while. I figured other "campers" would wonder what the heck, and think I was pretty stupid. Which I sometimes am. Possibly in this case. But it did make me lose interest in doing a card for week 4--I mean, what's the point? If you can't post your card, you aren't eligible for the drawings, and nobody can see how phenomenally creative you are. Besides, I am reading a really good book right now, and I am having trouble putting it down long enough to do anything else. Like make a card. I am surprised I took the time from reading to blog!

I will leave you with a few more Oregon photos, and wish everyone everywhere a wonderful weekend. 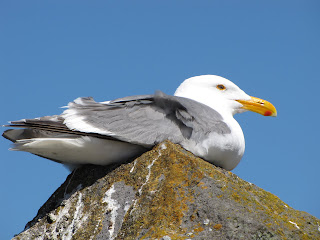 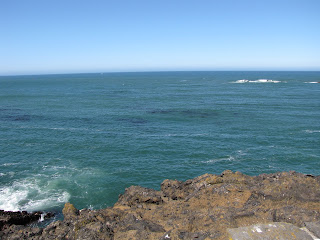 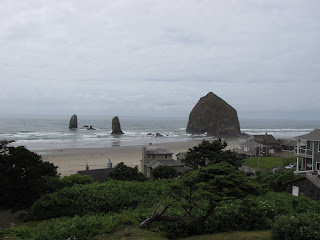