My DD, Angela, is such a loving person. I am so lucky to have her for my daughter! :^) I wish her a very Happy Mother's Day this year and every year to come. She is taking me out for Mother's Day brunch at Cork, which she did last year also, and it was so delicious! As if that isn't enough, this year she also sent me two dozen roses and a box of chocolates! Really? Yup. I almost pinched myself when I opened the box! Of course, that would have hurt, so I didn't.

Angela, my sweet, I thank you from the very bottom to the very top of my heart. You outdid yourself this year! I am so blessed to have you for a daughter and a friend. MWAH!

I would like to take a moment to thank everyone who has been so kind to comment on my blog. I really do appreciate the fact that you take time out of your busy days to stop by and say something. I know how caught up one can get in day-to-day life. I get that way myself; in fact, I am so behind in following all of you that I am embarrassed. I will try to catch up next week, I promise!

OK, enough nice stuff. I am back to being me, (bummer, huh?!). I wanted to let you know that I started bowling with Gary on a summer bowling league this week. And my friend, Ellie, (hi, El!), couldn't picture me bowling. I really don't understand this. Is it because I look so out-of-shape? Snort. Or because I am so blasted uncoordinated? Double snort. Or because I am old? Sigh....

Hey, believe it or not, I actually beat Gary by one pin in one game. HA! And I rubbed it in, too! Well, just a little. But at least I can tease him about it now. I could not do that when we were first married.

After our wedding, (in 1970 before there was dirt), we moved to Ft. Benning, Georgia from the Twin Cities in Minnesota. (Gary had just come home from Viet Nam before our wedding, but he was still in the Army.) OMG, the trip down there was a nightmare. We were in a little VW, which had such bad seating that I had trouble sitting down for a week afterward. The car burned oil and sounded like it was at death's door. I had never driven on highways before that trip. Nor driven a stick-shift. It's a wonder we made it down there--and in two days and nights of very hard driving! As a sidebar, I also have night blindness. And I did all the driving because Gary didn't have a driver's license. That's another story altogether.

Anyway, after we moved into our Army housing unit, furnished with giant cockroaches and no air-conditioning, we decided to join a bowling league. It was a way to cool down. This was Georgia, people. In June. We needed some relief from the heat and humidity. Oh yeah, and the tornadoes and hail storms. Can you tell I don't like Georgia weather? :^)  So we joined this bowling league, and besides learning to bowl, I learned some new things about my new husband. When he bowled poorly  he kept throwing his towel, kicking the ball return, and breaking the pencils at the pit desk, (yeah, back in the olden days you had to keep score). He was such a naughty boy then. Our team members actually asked me if we could kick him off the team! So I had a nice long talk with Gary, and he sheepishly agreed to behave better, which he did. My, how he has matured since then! LOL!

We were pretty poor back in those days. The Army didn't pay well, especially for enlisted men. I worked at the bowling alley in the mornings to make some money. Had to clean bowling shoes while I ran the morning leagues. Then I would go home to fix dinner with my hands stinking like dirty feet. UGH! Oh, and for a little extra money, we would keep score for the tournaments that were held at the bowling alley. That was a trip. You had to add quickly and accurately, because you were responsible for scoring two lanes of very fast bowlers! One time we even entered a tournament, and I actually won a bowling ball. I know, amazing, right? The ball was purple. So we named our next team the Purple Hippo. Aren't you glad you know that?

I am entering this card into the following:

Here's wishing that every mommy everywhere has a Happy Mother's Day! 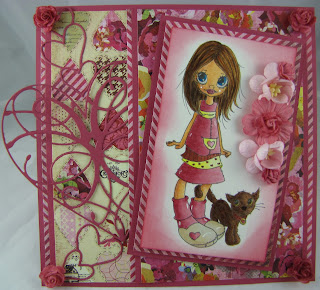