My good friend, Ellie, is having a birthday on August 6. But she and I are having lunch on Tuesday, so I thought I would give her birthday card to her then instead of waiting. (Besides, it's much easier to hand-deliver the cards I make than it is to mail them!) So, Ellie, if you are reading this before we have lunch, proceed at your own risk. Of course, if you want to see your card before you open it, by all means, keep reading! ;^)

Before I get to Ellie's card there are a couple of items I would like to mention.

First, I want to thank all of you for your well-wishes for my sister, Merrilyn. Her surgery last Tuesday went very well, and she felt great that night. However, not so much on Wednesday or Thursday. She had quite the reaction to all the anesthesia and pain medication she received. So she was sick to her stomach, (that's a nice way of saying she puked her guts out--oh, did I just say that?), on Wednesday and Thursday. She was able to proceed with her physical therapy in spite of her nausea, and really doesn't remember much about being ill. Sometimes drugs are wonderful. They help you forget those nasty bits you don't want to keep in your memory! The hospital finally got everything regulated, and Merrilyn went home o Friday feeling pretty good. She says her knee hurts, but not any more than it did before her surgery. And this pain will go away eventually. So she is a happy camper, albeit one who sleeps at the drop of a hat now.

BTW, her therapist told her that she was doing remarkably well with her walking and her exercises. I told you she built up her leg muscles by swimming, and it really has paid off for her. My other sister is attempting to do the very same thing before her surgery in September. I wish her every success, because that will make her recovery easier, too!

I would also like to mention that I read two books this week that were really great reads. Both are selections by Suzanne Dean for her Bookendz Book Club this month. I needed to get them read quickly as the month is about over! The first book, very well-written, is The Kashmir Shawl by Rosie Thomas, which I really loved. The second book is Promises to Keep by Jane Green, which is also very well-written, but can be a bit of a tear-jerker. Just sayin'. So, beware if you cannot deal with angst.

To the right of the beginning of this post, (no, your other right), is a short video for a blog giveaway by Darlene Lyons at Scrappy Dues. Check it out; she has 200+ followers now, and she is celebrating by giving us the chance to win some great stuff!

OK, on to Ellie's card. I picked out this digital image in the middle of March. I fell in love with it, as I have with all the Saturated Canary images. But I bought it because it is called Ellie's Birthday, and I wanted to use it for Ellie's card! It is just lucky that I remembered this plan of mine four months later. The old grey mare just ain't what she used to be and neither is her memory! Gosh, that was a bit snarky, wasn't it? Good thing I was talking about myself and not one of you! Where was I? Oh, yeah, Ellie's card. So I picked out a Create with TLC sentiment that I thought would go with the SC image. Both the image and the sentiment were printed out on Cryogen CS.

My paper choice is from the Basic Grey Life of the Party collection. And I paired it with some Stampin' Up CS. I added flowers, a stick pin, and a crown pin from Wild Orchid Crafts, some baker's twine from SU, bow die cuts from a Cheery Lynn die, a Tim Holtz Adage Ticket and Mini Paper Clip, and some cheesecloth. Just because I could. And I liked it. So there. Put that in your pipe and smoke it. Or not.

I am going to enter this card into the following:

Here's wishing everyone everywhere a wonderful week. And, if you're watching, enjoy the Olympics! 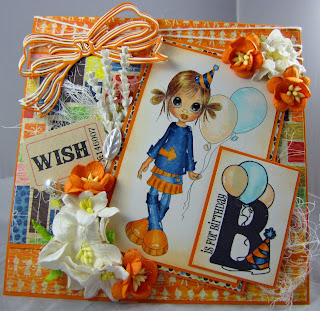