Our sponsor this week is Bugaboo. They have the cutest assortment of images, don't you think?

We are challenging you to use stitching on your cards. It can be machine, hand, or faux stitching. It's up to you. (Isn't that big of me! I chose this challenge.) I knew that I would use faux stitching, because that's how I roll. And I don't roll that way too often. Like almost never. Ever. So I thought it would be good for me to try; and what's good for the goose is good for the gander. Or other geese. Or gooses. OK, I think I'd better quit while I am not too far behind.

I got ahead on all of my DT work before we went to Hawaii. But I am back to being behind. Drat! I hope to catch up and get ahead again. Wish me luck. I really need it.

I said yesterday that I would add some more photos today. I hate to lie, so I will take a few minutes to show you some more of that fabulous vacation I wish I was still on. I think I was showing you our trip up to the northernmost part of the Big Island. We had stopped at a couple of beaches on the way up. Then we just kept driving to Hawi. As we drove north we could see Haleakala on Maui in the distance, but didn't get any photos. Silly us.

We stopped at the Kohala Coffee Mill in Hawi for a bite to eat. I had a yummy veggie sandwich & Gary had a turkey wrap. The sandwiches were so huge that we had no room for the Tropical Dreams Ice Cream, which is made on the island and is supposed to be delicious. If we ever go back, I will definitely try some. I didn't have coffee, either, as it upsets my stomach. (Gosh, I am such an old lady whiner, aren't I? Oh, and so much fun to travel with, for sure! Just ask Gary.)  The photo was taken by poor dear Gary. 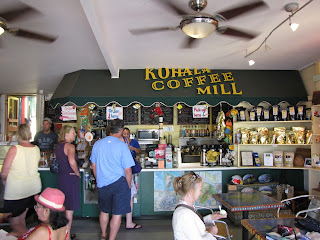 So we continued on the road to the next town, Kapa'au. If you've ever watched Hawaii Five-0, you have probably seen the statue of King Kamehameha the Great on the island of Oahu. Well, that is the second statue of the king that was made--the first one was lost at sea around 1878. However, someone salvaged it and it was found in Port Stanley by the captain of the wrecked ship. He sent the statue, which had a broken arm, to the Big Island. The arm was repaired and the statue was erected at the North Kohala Civic Center in Kapa'au. So I took photos of it. Natch. 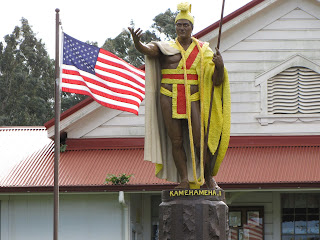 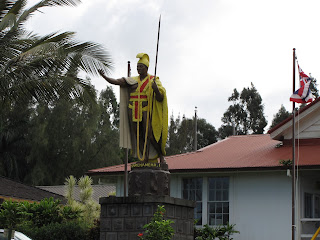 We left this area and continued as far east as the highway went. It dead-ends at the Pololu Valley Lookout. There is a trail there, but we didn't take it down to the valley. We weren't ready for a major hike that day. But we did see two donkeys and a young guy peeing at the side of the road. Odd. The guy, not the donkeys. Got a few shots there--of the donkeys, not the guy. And, of course, the ocean and the Pololu Valley. It is really beautiful there. Lush and green. And windy. 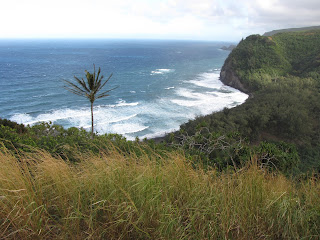 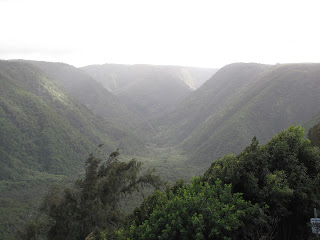 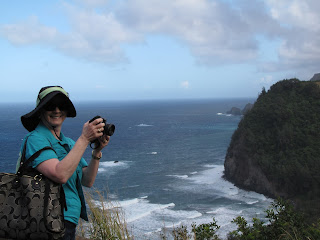 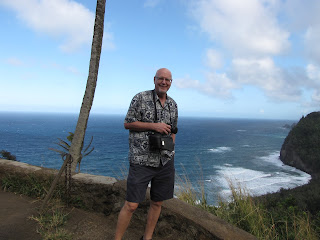 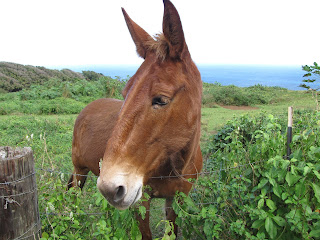 Well, well, well...looks like I am showing you photos of Gary and I, as well as a donkey. By the way, the donkey came over and put his head over the fence and just stared at me. I knew he wanted me to scratch his head; after a slight pause for courage, (I didn't know if he might bite me), I scratched his forehead and nose. He had very rough hair. But he seemed to enjoy the attention. And so did I.

We then took off and drove back to Hawi, where we took a different route toward Kailua-Kona. We drove the Kohala Mountain Road to Waimea. It was cooler up there and crazy-dark with the low overhead clouds on the one side, while the sun was shining on the other side. Oh, and that's our crappy little Camaro convertible at the side of the road. You know, the one that you needed to be a pretzel in order to enter and exit. 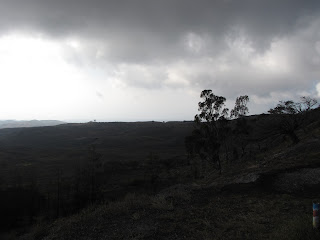 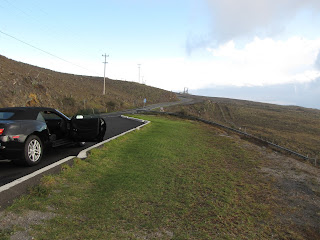 After reaching Waimea we decided to take the Mamalahoa Highway on the last leg back to Kona, rather than going back to the coastal highway. That turned out to be a bit of a mistake, because we got caught in our only rainstorm on the Big Island that week. I guess we needed to be in one, huh? Though I don't know what for, except to add to Gary's discomfort of driving that convertible. And, no, we did not have the top down in the rain, either.

BTW, we never got to see the top of Mauna Kea or Mauna Loa while on the island. They were always covered by clouds.

We found the Lotus Cafe that evening, which is a wonderful little Thai restaurant hidden at the back of a Kona industrial park. Such great food and the best Thai iced tea I have had ever! They put in coconut milk instead of condensed and they add ginger. Oh, my, how yummy! We loved the food enough for Gary to say we had to go back two more times. Well, we didn't manage twice, but we did go one more time before we left the island.

I used Carta Bella Devoted DP. I paired that with Stampin' Up CS. My largest hearts were cut using a pattern I drew myself with some help from a tutorial. I know, right? Who knew? I did my faux stitching on the large hearts with my white gel pen. Poorly, I admit, but I don't practice this technique. Like ever. Don't look for me to do it again anytime soon, OK? OK. (Yeah, me and my brilliant ideas.) I made die cuts using the following dies: Cuttlebug Hearts and Stamps, Spellbinders Classic Hearts, and Memory Box La Rue Heart. I finished off the card with some ribbon and netting from my stash and some Wild Orchid flowers and stick pins.

OK, it's over to you now. I am looking forward to your stitched greeting cards. And be sure to check out the creations by my talented teamies, including our GDT for February, Linda Weber. 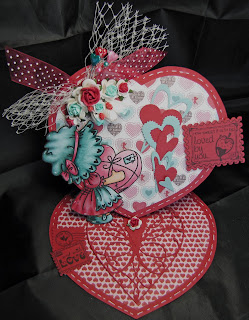