Wow, has it actually been a whole week since I posted anything? It doesn't seem like it, but I guess it has. I have been busy, making an anniversary card for my sister & BIL, which I'll post this week. But I was mostly busy with taking care of Donovan, the dog. Who had a bad week. He developed intestinal problems, poor baby, and on Wednesday night he needed to go out every hour, on the hour. He didn't get much sleep, but neither did I.

He seemed better on Thursday until the evening. Then he started his trots again. Fun. Not. So I gave him some yogurt and hoped he would have an OK night. Which he did, but then had problems again in the morning. So off to the vet we went on Friday. Almost $130 later, we had three medications and a special canned diet for him. But, hey, it was a much cheaper trip than his emergency visit to remove the rawhide chew that was stuck in his esophagus. So there is that. Hmm. I think I have a problem child, don't I. Good thing he is so cute.

He had a good weekend. No more desperate trips outside, thank goodness. Of course, I had to miss the two Diamondbacks games that I was supposed to attend. Couldn't leave him alone for several hours with the situation he was in. I did get to see the games on TV, so there is that, too.

I have to have a surgical procedure on Wednesday to remove a skin cancer from the back of my right shoulder. The doctor found it when I went in for my itchy skin condition. So he did a biopsy, and found that it is basal cell, so no big deal. Just needs to be removed. Except I have no idea how sore my shoulder will be right afterward, so I hope I get my assignments done for the week before Wednesday. I may not feel like it afterward.

I chose DP from the Prima Romance Novel collection. I distressed it with my Zutter Distrezz-It-All. I paired Stampin' Up CS with it. I added several die cuts to this card; they were done with the following dies: Memory Box Macarena Corner, Corner Bow, Victorian Frame, Tender Leaves, and Precious Hearts; MFT Rolled Flower, Mini Rolled Rose, and High Tea Party Doily. I added my own sentiment and the following embellies: clock, MIC dragonfly, wine glass charm, a safety pin, two Tim Holtz Adage Tickets, some netting for a bow, ribbon, cheesecloth, Queen & Co. pearls, and a Prima flower. Lots of stuff for a little image, huh?

Do check out the fab creations by my teamies, and our GDT, Joan LaBelle! Then, be sure to play along with our Anything Goes challenge! And have a great week! 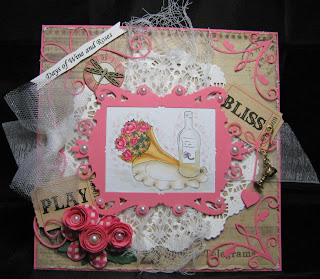