Our last challenge of the month is Anything Goes with an optional Christmas twist. And I take every opportunity I can now to make a Christmas card. I don't want to be in the same boat as I was last year--not enough cards made to send to my entire list. Really not good. Really.

Our September sponsor is Digistamps4Joy, and the winner will receive 5 digis. (I neglected to mention this last week.) And our own Jen Leeflang is artiste extraordinaire for DS4J. She has drawn over 500 images for the digi company! Can you say, 'WOW'?

Before I get to my card, I promised a review of the restaurants we visited during Arizona Restaurant Week. So far we have been to three, with one more tonight. (And, if I am really lucky, maybe Gary will take me to one on Sunday, the final night of the specials.)

Last Saturday we zipped up to Scottsdale to chow down at Tapas Papa Frita. We had never heard of the restaurant before this week, so it was intriguing to try it. (I think that is the whole purpose of the week--to get new customers into restaurants around the Valley of the Sun.) TPF, for short, is located on Stetson Drive on the second floor, right across from The Herb Box, (one of my fav places for lunch.) The chef/owner is a Basque from Spain, and was there to greet us when we came in the wrong door. (We were led into the back kitchen door by an employee when we asked where the restaurant was--yes, we are old and basically can't find our way out of a paper bag.) Anyway, the owner was most accommodating and led us to our table. The place has a really cool vibe (whatever does that mean?). You can be seated at tables for two or more, and there is a very long center table set-up that can seat an extremely large party. They have flamenco guitar and dancing later in the evenings on weekends, but we were done before they started their show.

We were given a glass of refreshing Mohito Sangria to start, along with some yummy dinner rolls and dip. And we took part in the wine special for the evening--a bottle of Crianza Tempranillo/Grenache blend that was 50% off and really wonderful. I ordered crab-stuffed piquillo peppers with Albarino saffron sauce for my appetizer. I thought I'd died and gone to heaven--it was that good. Gary had the Spanish cheese-stuffed Medjool dates with bacon, which were pretty darn phenomenal, too. For our main courses, I got a really great seafood paella, while Gary dined on braised pork tenderloin, with dry chilies and red wine sauce and toasted bread on the side. He loved it. And, for dessert, I had the churros con chocolate--the best churros I have ever eaten. Oh, my they were scrumptious! And Gary had Brazo Gitano, or Gypsy Arm Cake, which is a sponge cake roll, filled with whipped cream. We both thought that my dessert was the better of the two. Service was excellent, great atmosphere, and we will go back--especially now that we know where they are! (Cost: $40 per person.)

Tuesday night we met friends at Coup des Tartes, a BYOB, in central Phoenix. (Our friends brought a fabulous Duckhorn Merlot. A whole Magnum of it. Yes, yes, we finished it off, but to be fair, dinner did take 3 hours.) Coup des Tartes is a tiny little restaurant inside an old farmhouse, (built in 1932), on 24th Street, 16th Street. I have wanted to go there for years--ever since it opened in the 90's. The food reviews were always really good. And just recently the owner found out that the land his restaurant sits on was purchased and will be turned into a parking lot. So Coup des Tartes has to move to a new location, but the owner insists that the service will not miss a beat in the move. It's really a bummer, because this place is so cute. Most of the tables are in the living room, with a few more in another small room. They can seat only 40 diners at one time. Like I said, tiny.

But the food flavors are not tiny. We started out with a cheese, fruit & nut platter, which was really tasty, although I tried to eat sparingly, knowing I had three courses to go. Both Gary and I ordered the lobster Napolean with fresh organic greens, mango, and herbs. It was just the right-sized portion for an appetizer, and really succulent. Yum! Then Gary ordered the lamb shank, which was grass-fed, from Australia, coated with Moroccan warm spices, braised all day, and served over pearl couscous. He loved it. (I didn't taste it, as I don't care much for lamb.) I ordered the roasted salmon, which was open-ocean raised and organic, and I am not really sure how they do that. Anyway, the salmon was oven roasted and served with a savory butternut squash risotto, asparagus, and finished with roasted pumpkin seeds. It tasted entirely different from any salmon I have ever eaten, and was easily one of the most delicious. Dessert was chocolate pots de creme for both of us. Really rich, yummy custard, topped with fresh cream. And then we had coffee also, which I don't drink often as it causes heartburn for me. But this was really delicious coffee. I should have asked where they get their beans, but, alas, I didn't. (Cost: $40 per person.)

Then Wednesday night found Gary and I meeting at Beaver Choice, which has won an award as the worst-named restaurant, for obvious reasons. It is now located in Mesa on Baseline, east of Alma School--which was my old neighborhood for 21 years. (And how fast those years flew by.) The restaurant serves Northern European food, which is not my favorite, but I thought we should give the place a try. I had eaten at their old location once, with our daughter, for lunch; and, although the service had been atrocious, I remember that the food was tasty.

Well, the service is much better, though still uneven. Our waiter was wonderful, but our dishes came out at different times, which really frustrates me. It feels so rude to start eating when your dinner partner has no food. Even if your dinner companion is Gary. (Just kidding.) The kitchen still needs to do a bit of tweaking to get tables served at the same time.

Now I love dill, and it is featured frequently in the food at Beaver Choice. Gary is not a fan. Can you see where this is going? Yeah, I loved my meal--him, not so much. So we won't be going back, though I may still have a lunch there with our daughter, who loves the place.

I started my meal with three canapes: shrimp salad, gravlax, and Swedish potato salad with Black Forest ham. All three were delicious. Gary had potato horseradish soup with bacon and smoked sausage. I tasted it; it was OK, but certainly nothing like my appetizer. For dinner I ordered the seared gravlax topped with shrimp salad. (I kind of overdid salmon there two days in a row. But they were such different treatments, and both equally yummy.) The salmon just melted in my mouth. I had a side of really good, pan-fried thyme potatoes and three tiny salad accompaniments--sauerkraut, (very good), tomato basil, (a bit too much onion), and bean, (which tasted like canned beans. Ugh.). So this was a mixed bag meal. For Gary, his chicken schnitzel Cordon Bleu with Black Forest ham and Brie didn't hit the mark. I thought it was a bit tasteless, so I would never order it. He had the same three salads--he ate none of them--and some OK mashed potatoes. So I know why he doesn't want to eat there again. Oh, yeah, for dessert we had French-pressed coffee, (there's that coffee again: it's a wonder I didn't get indigestion!), and I ordered the Swedish pancakes filled with ligonberry, (absolutely excellent), while Gary had Rodgrod Med Flode, a berry & rhubarb concoction, which was tasty, but again, nowhere near as good as what I had. (Cost: $30 per person, including a glass of OK wine.)

So. That's the end of our eating adventures. Well, not quite. As we are going to Vincent's on Camelback tonight. I haven't been there in a few years. I loved the meals I have eaten there, so I am excited to go back and try something different this time. Will blog about that next week. Also, my sister, Merrilyn, and I are going to lunch today at Bink's Midtown, which is the Phoenix Magazine's Restaurant of the Year. Can't wait to try their food!

Now, if you have read all this, you are either a foodie, or a glutton for punishment. I'll let you determine which category you fall into. Without further ado, here are the details of my card:

I chose Saturated Canary Spritz for my card--he's too cute, don't you think?--and printed him on MICBC. I colored him with the following Copics:

My DP comes from the Memory Box Yuletide collection, and I distressed it with my Zutter; I paired it with Stampin' Up and DCWV CS. My sentiment is from Whimsy, (Holiday Ticket sentiments), and was die cut with a Whimsy ticket die.

I added baker's twine, jingle bells, a SU brad, some ribbon, and a bit of lace. I finished it with Wink of Stella Brush Clear and Stampendous Frantage.

This week's creations by my talented teammates are so pretty--do stop to see them. And please play along this week--it's easy-peasy. Anything Goes. With a Christmas twist, if you like. Have a great weekend everybody! 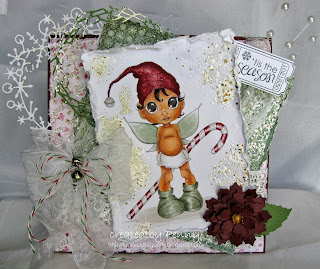