Yup, it is Friday again. The last one before Christmas--EEK! I. am. not. ready. Let's be clear about that. It didn't help that Gary and I caught colds this past weekend, so I have been really sluggish for a few days. I missed out on three parties, darn it all anyway. Was looking forward to all of them, so: bummer, bummer, bummer. Pfffffffffft!

Needless to say, that new car is not being driven much of anywhere. But I am driving it today as I am going to lunch with sister, Merrilyn, after mailing my Christmas cards. I am now O-U-T of cards. Yup, didn't make enough again this year. So what else is new? If you didn't get one from me, I am so sorry. Will try to do better this next year. I wonder if I should start sending Christmas letters like my cousin does every year. Only mine would have to be funny. Like my aunt's was the one year she sent out a letter. It was hilarious; everything bad in the world was happening to them that year, but she managed to make it all sound very humorous. Of course, she had a good sense of humor--it helps to start with that. Perhaps I should just forget it.

Today is the 20th of December, 2013. Which means that our granddaughter, Brynn Elizabeth, is now 10 years old. I ask you, how is that possible? It was just yesterday that she was banging her head on the wall during her baby temper tantrums. How could 10 years have flown by that quickly. (Btw, she no longer bangs her head against the wall. Or the floor. At least that I know of. Perhaps I should ask Angela. Or not. Maybe I don't really want to know.)

So, for those of you who are wondering, and I am almost positive that maybe one person out there cares, I am in the finals in one of my four Fantasy Football leagues. Woohoo. Of course, it's not in the league that I was in first or second place for the entire season, with a 10-4 record. Oh, no, hubby had to beat me in the first round of the playoffs in that league, the dirty dog. But, if I had to lose to someone, I guess it was best that it was Gary. No, I am in the finals in the league where I came in fourth, with a paltry 6-7-1 record. Gag me. I don't expect to win; I am, after all, playing my son-in-law, who led his division the entire season and ended up with an 8-6 record, and has a really good team. Much more respectable than mine. (In the first playoff game, I managed to beat the guy in my division, who had an 11-3 record--best in the league. Knowing he was pi**ed, lol.) If I should win this league, it will be my third time in five years, which isn't half bad. OK, enough of that.

In case you were wondering, and I am sure that you were not, we finally decided on an espresso machine. It took hours and hours of research, which should have been much better spent on making Christmas cards, but, oh well...

Anyway, we picked out the Izzo Alex Tre, which has been slowly making it's way to New York from Italy. Very slowly. Like for a couple of months slowly. But, I got the email yesterday that the machine is finally in and they are shipping it out to us. Whoooopeeeee! This I am really excited about! We are also getting a Mazzer Mini grinder and a whole bunch of accessories that are needed to make espressos and cappuccinos. However, they did not have the milk wash, nor the demitasse spoons, so I had to order those from Amazon. They arrived yesterday, much in advance of the machine, but at least they are here.

So how long do you think it is going to take me to become a proficient barista? I would wager it'll take several pounds' worth of coffee, don't you think? Hope I don't break the machine before I master it! I am almost afraid to get really good at it; Gary will probably send me to work in an espresso shop after he retires. (Good luck with that!)

Well, I've wasted enough of your time today. On to my card. I chose the image that Jo, from Time for Tea Designs, so graciously supplied to our DT. Another cutie, don't you think? I printed her on MICBC and colored her with my Copics:

I chose DP from the Basic Grey Aspen Frost collection and Zutterized it, (distressed it with my Zutter). Yeah, I thought I'd coin a new word. Whatev. I paired the Zutterized DP with Stampin' Up CS. I added cheesecloth, lace and braided trim to my design, as well as some die cuts, (now there's a shocker for ya). I used the following dies:

That's it. That's the end. That's all she wrote. Oh, not quite. Almost. I don't expect to see a lot of entries this week, since it is Christmas week. But I hope, if you have a chance, you will stop and see my teammates' cards: they're so cute! And maybe that will inspire you to color up something this week after all. If you have time.

As I won't be posting again until after Christmas, I want to wish each and every one of you, who celebrates it, to have a very Merry Christmas. And for those of you who don't, have a lovely holiday week! See you again next Friday. In the meantime, I will catch up on your fabulous blogs! 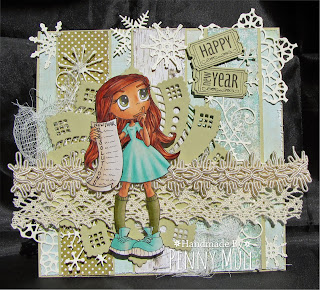