OK, so everybody can enter this one. It is an AG with a Christmas Twist, if you like. How easy-peasy! I certainly hope you find an image you love, hand-color it with any medium you choose, and add it to your project to enter our challenge this week!

We are sponsored this month by Sweet Pea Stamps, which houses a wonderful collection of fabulous artists and stamps! Be sure to check out the shop, but allow time for it--it takes a while to ooh and ah over all the fabulous digis there. And our prize this month is your choice of three digis! Kewl.

When we last saw our heroine, (or Foodie Glutton, FG, for short), she was going to Roka Akor with her husband and friends. Alas, she has no photos for you, but she was not overly impressed with the place anyway. She had butterfish tataki, grilled barramundi, and rhubarb galette, which all sounded better than it tasted. The food was good, not great, so there is no need for a return visit. In her humble opinion...

However, our FG, (who wants to be known as a heroine, but don't let her fool you), was able to go to other restaurants worthy of mention.

First of all, the night after Roka Akor, there was a memorable trip to La Pizzeta, in Scottsdale, with FG's hubby, (Gary), sister, (Merrilyn), and BIL, (Ron). It is a unique place, as the owner also offers cooking classes next door to the restaurant--and the cooking kitchen/dining area is larger than the actual restaurant. Weird, right? Anyway, the pizzas were fabulous! Great, flavorful ingredients and an outstanding crust! Speaking of fabulous, so was the first-course caprese salad and the yummy cauliflower appetizer. Worth another trip up there, although the place is 41 miles from FG's house. So it probably won't become a weekly hangout. (FG was really incompetent when it came to taking photos this week!)

The following night FG, her hubby, and another set of friends tried out Fuego Bistro in Phoenix. Another long-haul, (40 miles, but who cares during Restaurant Week). This is such a darling place. Looks like an old house, which is tucked back into a side street, so you would never know it was there. Unless you did. (Somehow that doesn't make as much sense written out as it did in my head.) The main seating area is outside on a large, rambling brick patio area. The patio is enclosed on the sides, so it gets shelter from the sun, for the most part. Not sure how much fun it would be to eat there in the heat of the summer, but they do have portable heaters for the cooler months in winter. The night FG was there, the weather was absolutely perfect for eating outside.

There was an almost obscene amount of food presented for the appetizer and the entree platters, which were shared by two people. But I think FG would have consumed even more of it than she did, if her stomach had not run out of room. A great tasting sampler of: empanada, salmon croquette, Cubano slider, veggie tostada, pernil asado, pasta with chorizo and chicken, tortilla-crusted tilapia, jalapeno creamed corn, chipotle cheddar mashed potatoes, and organic green beans. Then, huge desserts were served to share also: ancho chocolate chile torte and chocolate-chip horchata bread pudding, both served with chocolate malted crunch ice cream. Good grief. FG was about ready to burst. She let her friends take home the left-overs. But she will return. And soon, she hopes, because the food was all fantastic! (Best go again before it gets too hot!) Again, FG was more concerned with her stomach than your eyes, so no photos. Sorry...

There was time for one last Restaurant Week visit. So, FG, Gary, and another set of friends, chose Urban Vine in Phoenix for that last hurrah. What a hurrah it was. (It is almost next to FG's house, being a mere 35 miles away!) First of all, the restaurant is a MOD creation--Michael O'Dowd. For those of you who don't know, MOD established Kai as the premier 5-star, 5-diamond restaurant in the state of Arizona. His legacy there continues, but he wanted new challenges in his culinary adventures. He left Kai and tried another concept at Renegade by MOD, but that didn't go over so well--too adventurous for the neighborhood he picked. Closing up shop, he moved across town from Scottsdale to Phoenix...

Urban Vine is a much simpler presentation of food in yet another old Phoenix house--which has been home to other restaurants before MOD's version. But none could have been any better. That's because the place is quaint and eclectic, the service was very good, and the food was outstanding! FG forgot, once again, to photograph what she ate, but it was incredibly delicious. And paired to perfection with wines that the server chose. The first course was luscious Gazpacho, wonderfully-seasoned, served in a jar with yummy shrimp and chunks of tomato. The second course was an unbelievably fragrant, (also perfectly-seasoned), paella--which had been cooked in a bag. There was one sweet, tender jumbo shrimp, and plenty of tender, flaky fish in an incredible sauce with scrumptious rice. As a point of fact, FG ate every. single. grain. of. rice. And everything else that was not shrimp shell in the bowl. She probably would have licked the bowl clean, except Gary was eyeballing her to make sure she didn't. (He knows her too well.) To finish the meal, FG had the brownie dessert, which was a chocoholic's dream. It was moist, chewy, chocolaty, sweet, and sat on a cloud of whipped cream with strawberries. Mmm, mmm, good! (But again, no photos--just use your imagination.)

So I will give you three guesses whether or not FG will return to Urban Vine, (and the first two guesses don't count). Oh, my, yes, yes, yes...

Enough about FG. (She only cares about stuffing her face, anyway. So uncouth.)

As a matter of fact, after all the good eating that was done last week, we decided to go back to Citizen Public House with our dinner club this Saturday. Remember, I said it was tough to be me. Or FG. Whatever.

Hope I made you all as hungry as I am after describing all that fantastic food. Before I go feed my face, here is a recap of my AG card this week.

I did use the Christmas twist to make another card for the holidays. (I must have all of two or three now, at least. HELP!) My Sweet Pea Stamps image is the beautiful Holly, by Rebecca Sinz. I printed her on X-Press It BC and colored her with my Copics:

I wanted Holly to be the focal point of the card, so I added very little to my Stampin' Up CS: DP from the Simple Stories Handmade Holiday collection, some Frantage, and two die cuts, made with Cheery Lynn dies: Snowflake #2 and Holly Corner. That's about it.

Do check out the fabulous creations by my very talented teammates: Carla, Kathi, Vannessa, and Karen! Then, color up something and play along with us, won't you?

Have a great weekend! (I have to go eat now.) 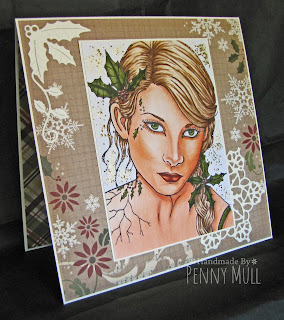