Our "Kids/Family" Challenge is this week. This is to acknowledge Son and Daughter Day, which is August 11th. I did not do a traditional "daughter card", as you will see. But I used a young girl image to make another Christmas card, which could be given to a young person. A young female person, to be sure. Like, possibly my one of my granddaughters. See how I work? Mmmhmm...

We had another fun surprise yesterday. American Express sent an email saying that someone tried to use Gary's card to charge $919.47 to the Apple Web store. Well, it certainly wasn't one of us. Fortunately, AmEx declined the charge. Which is good. However, you know the drill. Gary has to get a new charge card. Again. We went through this with American Express twice before--once with Gary's card and once with mine. I am not sure if it is because we use our AmEx cards so much, or if it is because AmEx is more likely to be compromised. Thoughts???

Last weekend was Arizona Breakfast Weekend for Thursday, Friday, Saturday, and Sunday. We took advantage of the special pricing by a couple of the restaurants and went for breakfast/brunch on Thursday and Sunday. We tried NCounter in downtown Tempe on Thursday. If you live in the Valley of the Sun, and haven't been there, I highly recommend it! We each loved our dishes, which were completely different. I had the Crack O' Dawn, which was a combo of ham, mushrooms, onions, grilled potatoes, and melted cheese. It came with toast, which I didn't eat, as the special pricing included a breakfast pastry--and, of course, I chose a cinnamon roll--which was scrumptious. Also included was a medium latte, which was really delish. Gary had the Killer breakfast sandwich, which he loved as well. It had bacon, Gorgonzola, fresh thyme, tomato, and almost hard fried eggs. It was the first time he had been to NCounter, but he wants to go back. So that was a successful visit.

Then, on Sunday, we returned to Barrio Urbano. This was our third visit. And breakfast was only $7, and included a Mimosa. (Which I really don't care for much, but finished mine anyway. Hey, it was included! Snicker.) Anyway, we had the Torrejas, which is basically Mexican French toast. And that sounds incredibly stupid. Like the restaurant we had in Whitefish, Montana in the 50's, called Frenchy's Chinese Gardens. But I digress. The Torrejas was made with bolillo, which is yummy Mexican bread. It was served with butter, piloncillo syrup--so thick and sweet, yum!--and jalapeno cured bacon. Although, if that bacon had even a hint of jalapeno in it, I'll be a monkey's uncle. It was really good bacon, but I think it was their "gringo bacon". They added powdered sugar at the end of cooking, and my platter could have used less sugar sprinkled on the bacon. That was my only complaint--otherwise, it was another wonderful meal at Barrio Urbano. FYI, when we arrived they asked if we had reservations. And that was at 8 a.m.! Shocking. I guess they do a huge breakfast business, especially on that weekend. So we will know for next time. (And there has to be a next time, so I can go back for their out-of-this-world chilaquiles!)

My sister, Merrilyn, and I went to Hummus Express for lunch on Wednesday. Just the two of us. We hadn't gotten together without our hubbies for a long time, and decided we needed a girls' lunch out. And it was really yummy. Had the $7.95 bowl special. Mine contained rice, falafel, several grilled veggies, tabouli, and hummus, served with a wheat pita. So we had great food and a fun conversation. Donovan got to go to Merrilyn's house for a play-date with her dog, Simon. Which is kind of a laugh, as neither dog really plays much anymore...

I think that catches you up gastronomically. In other news: well, football season is almost upon us. I am anxiously awaiting the first game. In the meantime, we are meeting our football seat-buddies for a preseason practice on Monday. I never would have imagined I would be doing something like that when I was younger. But, when you are retired, you can do all sorts of things for the first time. Like bungee-jumping or skydiving. (Oh, just kidding. I am weird, but I am not crazy.) And I am still reading. Quite a bit, actually. Both non-fiction and fiction. Right now, I am in the middle of a trilogy, called Daughter of Time. It's a pretty good read, if you like sci-fi.

Okey dokey, time for the card deets. We are sponsored again this month by Sweet Pea Stamps. YAY! One of my favorite digi stores, evah! So many great artists. So many fab images. And our winner gets to choose 3 of them this month. Do get your entries in! Just make sure you hand-color your image, with any medium you wish, for your project.

My colors were taken from the DP I chose--Docrafts Christmas in the Country Collection. I paired this DP with Stampin' Up CS. I added a die-cut bow using the Cheery Lynn Ornamental Wreath Bow die. I finished the image by using Pearl Pen Ice White for the snowflakes.

That's it for this week. Please check out the inspiration by my talented teammates: Carla, Kathi, Vannessa, and Karen. And please send Karen some good energy, as she broke her ankle this past week. (At least she has more reason to sit and color now!) We all look forward to you playing along with us again this week! 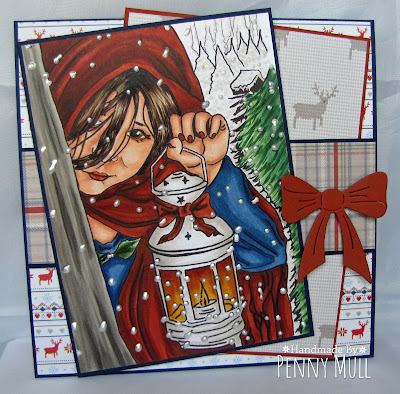