Yes, it is that time of year again! To celebrate the anniversary of our daughter and SIL's wedding. October 17th. An auspicious day for them, to be sure. And I combined their anniversary with the theme for this week's challenge, which is in homage to Count Your Buttons Day on October 21st.

How did I do that? Well, by picking an adorable image of a young couple, (Sweet Pea Stamps Kissed by an Angel, drawn by Conie Fong), and combining it with some button die cuts. I am nothing, if not clever, hey? Snicker...

We are sponsored again this month by the inimitable Sweet Pea Stamps. My home away from home. So many wonderful artists. So many fabulous digis. So little time. You can win the prize of 3 digis if you enter our challenge during the month of October. Good luck! (Just be sure to hand-color an image with the medium of your choice on your project entry.)

Wish I could tell you about all the fascinating things I have done this past week. But it was a fairly ordinary week for me. We did attend granddaughter Kelsey's cross-country meet on Friday afternoon--again too hot for a 2-mile run, if you ask me. But they didn't. Ask me, that is. Anyway, she came in fifth after three weeks of finishing 9th. So she was pretty happy!

We took the family to dinner at El Zocalo in downtown Chandler after the meet. Had a decent dinner, nothing fabulous, but it was nice to sit down to a meal with all of them. We do not seem to do that often enough.  But then, they lead such busy lives. I do seem to recall doing that myself, once upon a time...

Then we watched the Cardinals/Lions game on Sunday. Well, I didn't watch it live. After seeing the first possession end up the way our last one did a week ago, I set up the recorder and left the building. Like Elvis. (Not actually. I just went into the den to read.) I did see the game after we returned from a lovely dinner at Fleming's Steakhouse. (We had their steak & lobster special, and it was really delicious!) Gary watched a little of the game with me and then he went to bed, while I saw the rest of the lopsided win by the Cards. It is much less stressful to watch when you know the outcome, I have found. (Another snicker, but with an added snort.)

This week our 4-1 team will travel to Pittsburgh to take on the mighty Steelers. Will probably have to record this game again, as I don't know if I can watch it in real-time. I know the guys really want to win this one for their coach, Bruce Arians. You see, he used to work for the Steelers as their offensive coordinator. And they not only didn't renew his contract, but they told the public that he had retired...retired, my rear end. He was basically fired. And I don't think he has completely gotten over that. I, for one, am glad it happened. It meant that he went to the Colts for a year as their offensive coordinator/interim coach. And then came to Arizona as our head coach. In those three years he has been Coach of the Year twice. Not too shabby for a "retired" guy, huh? (Gotta stick up for us oldies, but goodies.) Anyhoo, I am sure he wants to return to Pittsburgh and trounce their team. As a final gesture, if you will...

On a smellier note, I cleaned up all the dog doodoo yesterday. Quite a fun job. One that I try to wiggle out of if I can coerce Gary into doing it. 'Cuz it has been really hot for several months, and I don't do well working outside in the heat. I am much better when it cools off. If I had known that I would perspire so profusely, I would have wiggled out of poop patrol yesterday, too. Unfortunately, Gary wasn't here, and I needed to get the job done. As we had the builder of our house coming out for an inspection. And I didn't want them tromping through Don's leavings and smooshing them all over the place. Yuck. OK, enough of that. I told you I had an uneventful week.

On to my card. I printed the cutie-pie couple on X-Press It BC and colored them with my Copics and Twin Touch Brush markers:

I took my palette from my DP, which is from My Mind's Eye Honey Cake collection. My CS is from Stampin' Up, and the button die cuts were made with a Sizzix Buttons #5 die. Fairly simple, if not actually CAS.

Please check out the beautiful creations by my talented teammates: Carla and Vanessa! And then please play along with us again this week! Our theme is easy to do!

Oh, and I plan to catch up on your blogs today or tomorrow. I am behind in my commenting, because I have been so swamped, doing nothing.  Clearing throat loudly here and running away... 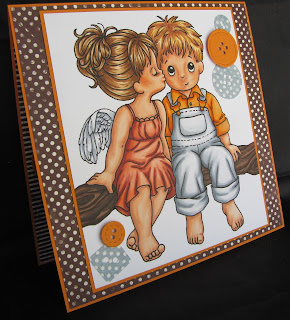