Good morning to you! Unless it is afternoon, evening, or nighttime like it is here at the moment this is published. Then good whatever...

Hey, did you know that we had an earthquake here in Phoenix? Yeah, and it was so strong that Gary and I didn't even feel it. And we were awake at the time. Guess it didn't make a big impression, huh? Haven't seen any damage here, either--no cracks, no sinkholes. Nothin'. What a bore. I probably should thank my lucky stars that it was a bore, shouldn't I?

This week is a bye week for us, so it will be entirely stressless. Of course, that also means it will be rather uninteresting. Guess I should just root for some upsets around the league. Last week was pretty scary for a lot of teams, don't you think--with all those season-ending injuries to marquee players. I am sure a few of them are quaking in their booties.

We did get our next home game flexed--which is a strange way of saying that the NFL changed the time for the game. Instead of an afternoon game, it will be a Sunday night game. They must figure that more people will be interested in seeing the Cardinals and Bengals than the Chiefs and Chargers.

We have to go play the Seahawks in Seattle--also a Sunday night game--the week before the Bengals come in here. Should make for an intriguing couple of weeks. Unless you aren't a Cardinals fan--or a football fan, for that matter. Then, frankly, my dear, you really won't give a darn...

Our granddaughter came in 15th with her best time at her last cross-country meet of the year. I am not surprised she ran her best since it was an early morning meet--with much cooler temperatures. Anyway, congrats to Kelsey Meghan!

Have you got plans for Thanksgiving? We are still trying to figure out what we are going to do. And it is getting a bit late. But that's Gary for you. I keep asking him and he keeps putting me off. Kind of like the way he waits until the last second to make Valentine's reservations, and then acts stunned when all the restaurants are booked up. Go figure...

Went out to lunch with my sisters on Wednesday. We went to Flancer's, which is just north of downtown Gilbert. We all had their filet mignon salad, which was quite tasty. It was so huge that we just knew we couldn't finish them. And then we did. Funny how that happens.

Then went to a wine dinner at The Bistro in Queen Creek Wednesday evening. Quite tasty! They had the most amazing tomatillo sauce for the port chops. Yum, yum, yum! (Really great salad, and fantastic chocolate tuxedo pie for dessert!) Of course, I forgot again to take photos. It must be an age thing.

Well, this post has been much ado about nothing. So I'd best get to my card for the week.

We have a really fun sponsor this month. Vera Lane Studio. She sponsored us about a year ago. She is again offering a digi set for a prize. Her images are so kooky and great to work with! I will be using mine at the end of the month. Do go check out her Etsy shop!

This week I chose a Saturated Canary image, Ice Cream and Pickles, for my card. I printed her on X-Press It BC and colored her with my Copics:

I had colored her dress with Copics also, but when I looked at her with the DP I chose from the Carta Bella Cool Summer collection, I was almost ill. Terrible color-matching. So bad that I decided to paper-piece her dress with DP, and cover up the coloring I had done. She looks much better, IMHO. I paired the DP with Stampin' Up CS. I added some fun die cuts made with the following:

And that's about it for this edition. Please check out the fab creations by my talented teammates: Carla, Kathi, and Vannessa. And then play along with us, won't you? Just hand-color your image with the medium of your choice for a chance to win a darling image set from Vera Lane Studio.

And have a wonderful weekend! 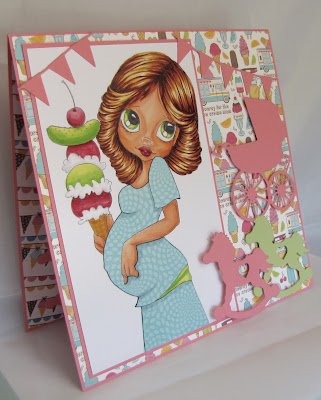