Yeah, on my last post I told Gary's bank account to watch out for the stamp show purchases. Turns out I meant that. Big time. When I told Gary about my purchases, he just sighed. Poor baby.

Yes, my sister, Barbara, and I had a wonderful time at the show. We found many dies that just had to come home with us. They did. They were screaming out our names as we walked by them in the Sweet Stamps' booth. Honestly. I'm not kidding. And stamps. Well, let's just say what idiot would go to a stamp show without buying stamps? Certainly not me. Ergo, I am not an idiot. Or, I am not an idiot who didn't buy stamps. Many stamps. Too many stamps. (Can you ever really have too many stamps? Inquiring minds want to know.)

We did buy stamps from Judith. Or Stamps by Judith. I'm not sure how to say that. Judith is from Minnesota and has a wonderful mix of stamps. I had never purchased stamps by Judith until last weekend. Now I own a collection that needs its own storage building container. And my card today does use both a Judith image and a Judith sentiment.  Note: Not that you'd know, (because I keep correcting it), but every time I type Judith, I actually type Judity. What the heck?

Just want to mention, before I forget, that there is a restaurant across the street from the Mesa Convention Center. Don't bother. It may be the lesser of two evils when you consider the food from the Center itself, but it's not worth it.  I don't even know the name of it--that's how memorable it was!

Back to the show. Barbara and I found ourselves convulsing in laughter in another booth. In fact, the guy running the booth told us we needed to buy something since we were getting so much entertainment out of looking. He was right. We bought many stamps there, too, both image and sentiment. They are Rubbernecker stamps, which I had never heard of before. But I will look for them again at the new shows, because they are too danged funny. Hopefully, I will find a need to make many, many humorous cards!

I also wanted to mention that we spoke with the gentleman who owns Cheery Lynn Designs. He sat with us when we took an iced-tea break at the stamp show. What a cool dude, Dude! He said he cashed in his retirement money to start his company and was pretty nervous about it at first. But things are going well now, and he seemed most proud of the jobs he is providing for his employees, who he thinks are all great people. I find that so cool! His designs were the first intricate dies that I saw on the market. He told us that it is an aeronautical background that enabled him to create such sturdy, but delicately-designed dies. He also manufactures dies for other die companies. Like Memory Box and Papertrey Ink, for instance. And these dies are made right here in Arizona. Really nice for our economy! :^)

Since I have finished my Outlawz guest designer cards for the month, I am able to enter other challenges now. Today I made a card to enter into three challenges:

As I said above, I used two Stamps by Judith, (yep, I typed it 'Judity' again--arrrrgh), that I purchased at the stamp show. I chose Basic Grey Oliver paper and combined that with SU CS. The doily was created with a Cheery Lynn Polynesian Sails Oval die. I made my own template for the oval inside the doily to cut out the image. A bow of Stampin' Up ribbon, a Stampin' Up vintage trinket, and a Tim Holtz trinket pin were added to the design. I rubbed some Distress Ink and some Stampin' Up ink onto the image oval. I accented the image with a Signo Uniball white gel pen, some Stickles on the diaper pin, and some Glossy Accents on the baby bottle. The image was colored with Copics:  BG72, BG75, E02, E04, C00, C0, C1, C3, C5, C7.

Hoping everyone everywhere has a great Thursday and Friday. I should be back on Friday with the  next guest designer card for the Outlawz. 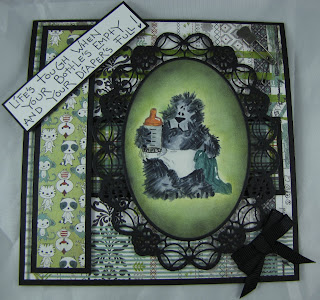