Today is the first day of the rest of my life. And yours. It is also the first day I am appearing as a guest designer for the Outlawz Copic/Promarker design team. I am so thrilled to have been asked! You have no idea what that has done for this old lady! (Besides scaring the cr** out of me!)

My first card as a guest designer was for the 'Men Only' challenge. And my dear sweet hubby has his birthday this month. He will be 64. Yes, just like the Beatles said, I will still "need" him and "feed" him when he's 64. Although that is a bit of a lie, there. Yes, it is. Not that I won't still need him, because who, in their right mind, wouldn't still need a man like Gary? He's just too perfect for me. Ask my daughter. Or my sisters. They'll tell you. He was my perfect match. No, the lie exists because I don't feed him. See, how perfect he is for me? He sometimes cooks wonderful meals for the two of us, which is more than I can say for myself! And helps me with the vacuuming. And he scrubs toilets! How many men do you know that will scrub toilets for you? The only thing I keep him away from is the laundry. Once upon a time, there was a man named Gary, who washed something red with our light clothes. Yeah, and then we had a pink wardrobe. So, I keep him away from the laundry. But he literally does anything else around the house. How special and perfect is that?

Oh, gee, I digress. Back to the 'Men Only' challenge. I decided to do a card for Gary's birthday to meet this challenge. Speaking of challenges, Gary loves to win them. Especially athletic ones. I don't remember if I mentioned that he won the fitness challenge here at Seville for the month of January. He managed to participate in so many fitness classes that he came in first place! And this is a family community, so he beat out much younger competitors, and did it missing an entire week of exercise! That is how competitive he is. Also, when I got up this morning, I found a certificate on the kitchen counter, which was made out to Gary for winning his spinning class challenge. Keeeeeerazy! Competitive-much? That's my Gary!

So back to the 'Men Only' challenge again. Last year I used the Magnolia Edwin with Bicycle image for Gary's birthday card. Because he takes spinning classes. Get it? I'm crafty that way. Of course, Gary thought the bicycle was a jack-hammer, so he didn't exactly catch my meaning with that card. This year I decided to use the Magnolia Waterfall Background image and the Magnolia Edwin with Lizard image. Hopefully, he will know the reasons why I used them! We are going back to Maui in April, and there are some beautiful waterfalls there. We love waterfalls. We love to photograph them. And we love lizards. We love to photograph them, too. Anywhere. Any time. Love them. So, this seemed like a good combination for Gary's card this year. We'll see.

I chose Kaisercraft Chapter One patterned paper, because the colors were so perfect for my images. I used Memento ink and Cryogen CS for the images themselves, and SU CS for the rest of the card. The sentiment is from SU, as were the punches used in affixing the sentiment to the card. I added Pearl Pen dots, because I could. And you know how much I love die cuts! Love, love, love them. It is no surprise, then, that I used several dies on the card. They are, in no particular order, (don't you love it when the hosts say that on reality results shows?), Spellbinders Labels 1 and 6; Memory Box Savannah border die; and MFT leafy flourish die. For the waterfall, I added Glossy Accents and Donna Salazar Fairy Dust Glitter, though it is hard to see in the photograph. I also added Glossy Accents to the lizard's eyes. (Also hard to see in the photograph.)

Two miscellaneous thoughts: one, my maternal grandfather's name was Edwin. I never met him as he passed on before I was born. But I think of him every time I use an Edwin image. Hi, Grandpa! And, two, I colored hair on the Edwin image for Gary, even though Gary is quite bald and shaves off what little hair he has left. But I chose colors like he had before he turned gray. And bald. Just thought I needed to explain that. I don't know why. Oh, one more thought, which makes three miscellaneous thoughts. So I lied. But not on purpose. Really. Miscellaneous thought number three: I am almost done with my last card for the guest design spot! Hooray! You'll see each one on the Fridays of this month.

Here's wishing everyone everywhere a wonderful weekend! I get to go to the Rubber Stamp Spring Fling in Mesa tomorrow with my sister, Barbara. Good times! (Look out, Gary's bank account.)

P.S. I decided to enter this card into another challenge. By your leave. 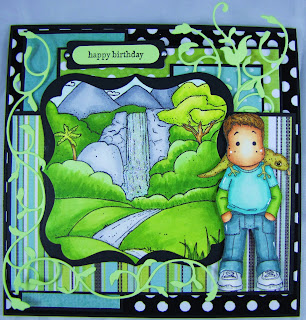