Are you ready for some football? How about a food review instead? Mmmmm.

I mentioned yesterday that we went to Cork in Chandler Saturday night with friends. I also said that I didn't know what we ate, since I wrote the blog before we went. Does that make sense to you? If it does, you're just as screwy as I am.

We met some friends at the restaurant at 6:00 p.m. and we didn't leave there until after 10:00. Yes, it was a nice leisurely dinner, and the restaurant was not overly busy, so they let us sit and visit. And laugh. Because you just gotta laugh if you are out with friends, right?

None of the portions are large at Cork. In fact, they like to call them "European portions". Now, I have never been to Europe--at least not it this lifetime--so I have no idea how much is eaten in one course over there. I am sure some of you could enlighten me. I do know that we have ridiculously large portions at some restaurants here in the States. Which I always try to finish, because that's the way I was brought up. You couldn't leave the dining table until you had finished your meal, or "cleaned your plate." We did not bring our daughter up that way. I think it's grossly unfair to make a child suffer through eating food that makes them gag. Like beets, for instance. Not that I know anything about gagging on beets food.

Where was I? Lost in my own mind. Which can either be a really scary place or completely devoid of thought. Like now....

Oh, sorry. My bad again. Yeah, yeah, now I remember. The small portions at Cork. I rather like small portions, as I don't get uncomfortable while dining. I had the most scrumptious scallop ceviche, served with tomatoes, peppers, onion and plenty of acidity. It melted in my mouth. The tang and sweetness was a wonderful combination; it was the special appetizer of the night. Well worth the $50 it cost. Oh, for goodness sake, I am just kidding. It was only $45. Pfffffft. It was actually under $20, though by how much I neither know nor care. Gary had the Fois Gras Torchon, which he liked, but said it didn't compare to the fois gras we had at Kai. I am sure his cardiologist would not be especially happy that he was eating liver. Oh, well...I am his wife, not his mother, as he so often reminds me. So I just pretended that I didn't see him eat it.

My main small course was Berkshire Pork Tenderloin. I love tenderloin, whether it is pork or beef, and this was just fabulous--tender morsels in a mustard Zinfandel sauce, with haricot verts, mushroom ragout, and creamy polenta. Again, melt in your mouth. Yummy, yummy for my tummy. It was definitely worth ordering. Gary, oddly enough, had the same dish, and loved it just as much. But the portions are really small. So when they came and asked if we wanted dessert, I said yes, but that I was not going to share with Gary. Good thing, too, because the portion was so small that it was gone in about four bites. He had the same dessert, which was Huckleberry Crumble. Like a moist piece of coffee cake with huckleberries, cinnamon, and brown sugar, topped with a tiny bit of vanilla bean ice cream. Oh, heaven.

I believe Connie had seared yellowfin tuna with soy caramel, scallions, spicy mustard, and black sesame seeds. That was followed by char grilled elk strip loin, with fingerling potato and corn hash, grilled endive, and plum barbeque sauce. Then she had the huckleberry dessert, too. She loved all of her courses, as well.

Her hubby, Bob, had an organic green salad with St. Pete's blue cheese, spiced caramel popcorn, pear, and aged balsamic vinaigrette. He had the special of the evening which was black cod, but I cannot tell you what came with it. All I know is that he thought it was great. And he finished his meal with a trio of sorbets, which he loved as well.

So, all in all, it was a terrific evening, with good company, pleasant surroundings, and fabulous food. What more could a girl ask for? Or an old lady? Oh, did I forget to mention the wine? Big boo-boo. That definitely deserves mentioning. We had two bottles, over the course of four hours, of Cakebread Cabernet Sauvignon. One could drink this wine with just about anything, it was so delicious!

BTW, I have to mention that the chef at Kai, our five-star restaurant in the valley, is leaving to work at District, which is the restaurant at the downtown Phoenix Sheraton. I cannot believe it. I really do love the District, but it doesn't begin to compare to Kai. What is he thinking? I'm wondering, perhaps, if aliens removed his brain.

Anyway, our challenge this week at Lady Anne's  is again Anything Goes. We have a new home for the challenge, but we are still the same old peeps. Oh, sorry, I am just speaking for myself. (Clearing throat at the awkward silence.)

I don't know why I chose my image, other than I wanted to make another Halloween card, and this image, Witchy Waitress, is just too cute. After all, it is another Saturated Canary image by Krista Smith. Need I say more?

I printed her on Cryogen CS. And I decided to pair her with this Create with TLC sentiment, which also gave me ideas for the design. I chose Carta Bella All Hallow's Eve design paper, which I distressed with my Zutter Distrezz-it-All. I combined this DP with Stampin' Up card stock. I used several die cuts from the following dies:  Memory Box Dancing Skeleton, Ghosts, and Branch; and Spellbinders Labels 10.

I have to mention here that I had to print out a photo of the skeleton die. It just comes in pieces. And I combined the pieces very poorly. I had the neck bone connected to the knee bone, and the shoulder bone connected to the ankle bone. Somehow that just didn't look right. But I managed to get it all sorted out, thanks to the photo. (I didn't really have it put together that badly, but I will admit I had leg bones and arm bones mixed up.) 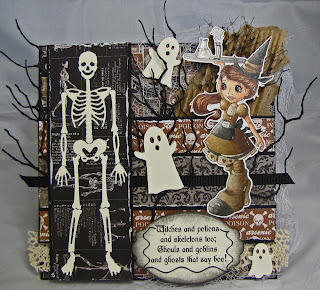 I am going to enter this card into the following: