I am doing my Jellypark DT work backwards this month. I designed a card for the challenge two weeks ago, when I should have done a release image. Now I am doing a release image when I should have done a card for the challenge. How contrary am I? Chalk it up to confusion this month with the trip I just took. Hopefully I will be back on track next month and do my assignments in the proper order.

Speaking of that trip, I haven't mentioned much about it yet, have I? I am still trying to catch up with everyone's blogs, though it seems I am running in slow motion on that front. I decided to take a break from comments and write up an actual blog. Haven't done that in ages. And I know my sisters miss the extra chatter.

So, I flew to Maui with my sugar daddy, aka Gary, on January 7. We then took a 9-seater prop plane to the Big Island of Hawaii. When I walked out on the tarmac to board that plane I felt pure, unadulterated terror. The plane looked a lot like a mosquito sitting out there. Scared the patootie out of me. What is a patootie anyway? My spell-checker wants to change the word to patriotic, but that is definitely not my intent here. Patriotism has nothing to do with wanting jump back out of a toy plane before it takes off.

Gotta tell ya, the seats in that plane move. It's like they're not really well-attached to the floor. And they tilt at a funny angle so you have to lean backwards during the flight--in a very awkward way. It made my belly button pop out. Well, not really, but it certainly felt like it should have. Take-off was super-scary.

Back up just a moment. We flew on the Monday that they were actually playing golf in Kapalua for the PGA. You see, it had been so blasted windy over the weekend that they had to cancel the rounds of golf. On Monday things had settled down enough to resume the tournament, but it was still windy. We could tell by our bumpy landing from the mainland.

OK, now you add that extra wind to the normal fairly windy conditions and you know that our little, tiny, teensy, weensy prop plane had quite the time getting down the runway, off the ground, and up in the air. OMG! OMG! OMG! OMG! If it hadn't been unladylike, I would have peed my pants. Sorry, that was gross. (It was my evil twin, getting back at me for making her fly in that itty-bitty plane.)

So we bounced along in this minature airplane up to 8500 feet, where it settled a bit, (but not much), for the half-hour trip to Kailua-Kona. I was absolutely terrified the entire time, and a local on the flight took pity on me and talked to me during most of the horror. She even took a photo of Gary and I to take my mind off what was really happening. Good thing I had my sunglasses on or you would be able to see my eyes bugging out of my head. Notice that we are leaning toward each other. We are leaning in the aisle, People! That is how small this plane was. Lord have mercy, I had to board that plane 7 days later to return to Maui. I didn't even want to do that. But that's another story. For another post. 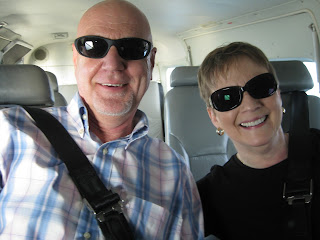 Suffice it to say, we did land safely--it actually wasn't a fraction as windy on Hawaii, so the landing wasn't too terrible. Compared to what. Oh, I don't know--perhaps falling into an active volcano. Or being attacked by a shark. Something fun like that.

Anyway, I almost kissed the ground after I deplaned. Flying in that gnat reminded me of the helicopter trip I took with/for Gary on Kauai in 2005. Will never get on another helicopter, and will never, ever, get on another prop plane. No way, no how. Gary said it was on my bucket list. IT WAS NOT. But he put it there, I lived through it, and it has now been removed. My bucket list has much calmer things to do on it now. Like swim with a dolphin. Or snorkel with a sea turtle. You know, safe things. BTW, the reason Gary looks a little uneven is because he shaved off his mustache--so that he could use his snorkel mask without Vasoline. And no, that is not an off-color story. To get a mask to seal, if you have a mustache, you have to use Vaseline. Which Gary doesn't like to do. That's why he looks a little odd. Of course, he is sitting next to me, which could also make him look a little odd. And, now that I look closely, we also look old. We are, but I don't really like being reminded by a photograph.

OK, I will blog another time more about the trip, but first I want to leave you with a photo of the view from our balcony at the Sheraton in Keauhou. I spent 7 mornings having tea on this balcony, listening to and watching the waves. It was like having a spot in Heaven. Yeah, I want to go back to my little grass shack in Kealakekua, Hawaii. 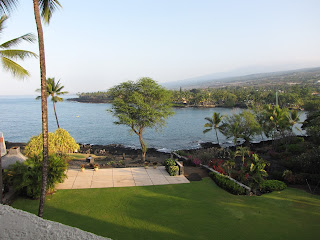 My DP is from the Graphic 45 Tropical Travelogue collection, which I paired with Stampin' Up CS. I kept this fairly simple, (for me), and just added a couple of die cuts using: Cheery Lynn Lace Corner Deco B die and MFT Double Scallop Border die. That's it for this edition.

Check out all the fun DT cards made with the release images and the great DT cards for our new challenge:  Button It Up. Looking forward to seeing what you create! Have a great weekend! 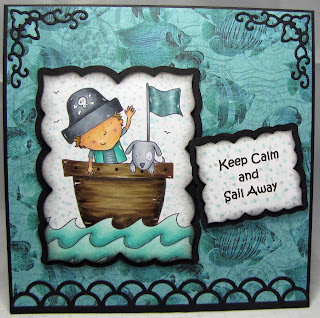