We have a new sponsor for 2013! And they will be sponsoring this week's challenge. Cool, huh? There are so many wonderful images at DS4J that it will be fun for the winner to shop.

Unfortunately, I already had my card done for the week by the time our new sponsor was announced. And I had no time to create another. However, I will be using a DJ4J image on the 21st, so look for that in the two weeks.

Our challenge this week calls for using a brad and one newly purchased item. That should be easy-peasy for me, right? Well....not so much. I really didn't do much crafting shopping in December, except for paper. (Oh, do sit down until the shock wears off.) So I went out, (I use that term loosely as I actually went online), and bought a new image from Saturated Canary, "Queen of Hearts", to use on this card. So there's my new item. And, as you can see, I added not one, but two Stampin' Up brads to my card. I am such a rebel.

I know I am digressing, but I had to mention this. I took Don in to the vet last Wednesday for his well-doggy check-up. I swear, you need to be independently wealthy to own a pet these days. There was nothing wrong with him, he didn't even get a shot, (yet, but that's because they are checking his blood titer first), and it cost me $318. Good grief, Charlie Brown! I bet Snoopy didn't cost that much to keep healthy. Maybe I should follow Charlie's lead and stick Don out on top of a doghouse in the backyard. Then he can roast in the Arizona sun. Hmmm...roasted Maltese. Could be good, I suppose, but there's not much meat on him. Perhaps he would taste like chicken. Doesn't everything--from frog's legs to rattlesnake? So why eat them--why not just go for the chicken instead? Inquiring minds would like to know. Now, where was I before I so rudely interrupted myself?

And then I slapped her on the back of the head, because I have been watching entirely too much NCIS while crafting lately. (Do you get that? If not, try watching the show sometime on USA Network.) Actually, I treated her worse than that--I stuck Glossy Accents in her eyes--don't try that, it stings! I accented her with a white gel pen and called her finished.

Then I fussy-cut her and mounted her on my card. I used DP from My Mind's Eye Lucky in Love collection, which I paired with Stampin' Up CS. I added a sentiment from Create with TLC, which I die-cut using the Magnolia Doohickey Lovely Tag die. My other die cuts were created using Memory Box La Rue Heart die and La-La Land Crafts Hot Air Balloon die.

As a finishing touch I added a Stampin' Up bow and Maya Road Mini Hanger to the heart tag. Up, up and awaaaaaaaaaaay!

Be sure to check out the inspirations from my talented teammates! Looking forward to your creations this week. And, if you don't have anything newly purchased to use, you have my permission to go out and buy an item or ten! Have a great week. 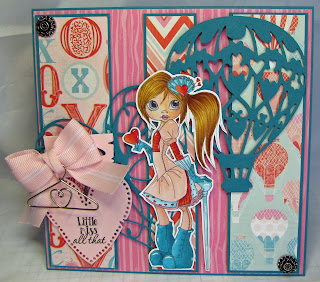