Well, it must be Monday since it's another challenge at The Outlawz Greetings Card group. Or vice versa. This week we want to see stars and/or stripes on your card. And don't forget your greeting, (which I sometimes almost do. But then, I have an excuse. I'm getting old. Oh, who am I kidding. I am old). This week we are again sponsored by Bugaboo Stamps:

I naturally used a Bugaboo image on my card this week. She is called "Raggedy Angel--String of Stars". I thought she was pretty cute--and certainly perfect for this challenge.

Before I get to the description of my card, I will bore you to tears with some more vacation memories. I'm even adding a few photos for your viewing pleasure.

So let's see. I told you about the flights from he**. I am such a crabby old lady, aren't I? Don't answer that. At least not in writing. OK, so the first day we got checked into our timeshare. We stayed in the Harborside Resort at Atlantis. We got an extra 4 days, since we checked in during low season. Of course, we had rain for all four days, so be careful what you wish for. 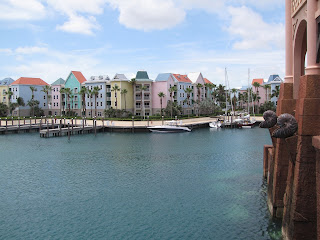 Our timeshare was clean and spacious. We had a living area, dining area, full kitchen, bedroom, bathroom with two sinks (yay), and a balcony. We asked for a harbor view--again, be careful what you wish for--which we did get. We found out later that night that being on the harbor could be quite noisy. The marina was just a bit east of us, and cruises were leaving at all hours of the day and night. They all played loud music--our favorite was the Booze Cruise. Each of the BC boats were packed with standing room only, and the participants were dancing up and down. Bobbing you might say, with their hands in the air. Because the boat dude told them to raise their hands in the air. Several times. Each cruise. Every day. Every night. Over and over. The one saving grace for the rainy days--there were not many cruises--certainly not the night-time Booze Cruises. Hallelujah.

We went to Bimini's for dinner the first night after we got settled. And the food was pretty decent, as I recall. But the best part was the dessert--omg! Guava duff. Absolutely scrumptious. I can't even describe it, except that it was the texture of a cinnamon roll, but like a cake, with lots of guava inside it and covered with a fantastic sweet sauce. I guess it is complicated to make, but someday I may try one. It was too, too utterly delicious. We stopped back there for another meal later in the trip--do ya think we had the guava duff again? Duh.

Yes, yes, I did gain 3 pounds while we were there. But, remember, it rained the last four days, so I didn't get any exercise at the end of the trip. And that's why I gained the weight. That's my story and I'm stickin' to it. It had nothing to do with guava duff, or rum drinks, or my butter-drenched lobster, which I had at Cafe Martinique--a Jean-Georges Vongerichten restaurant. Oh, was that lobster sweet and yummilicious! Haven't had lobster that good since I was a kid. This was soooo fantastic! (A bit pricey at $68, gasp, but I decided I deserved it, for no reason known to mankind or mouse.) And the salad I had before the lobster was also wonderful--such a great dressing on it! I thought I had photos of our entrees, but somehow we managed to do videos of them instead. Oh well....at least you can see my fabulous salad! And I ate every bit of it. BTW, the restaurant interior was really elegant, with a very high pitched ceiling, which doesn't show up in the photo. 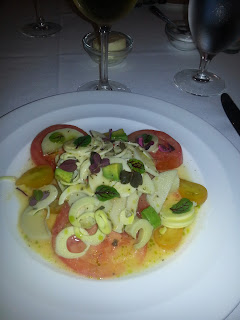 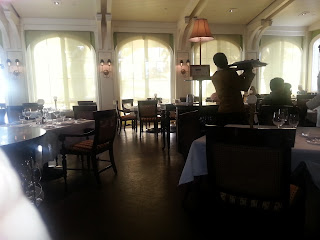 We also ate at the Bahamian Club. Would you believe there was a screaming little monster in there all during our meal? And he was being quite ignored by his parents, dang it. I thought he could have been seated elsewhere. Like outside. At the beach. On another island. In another hemisphere. Perhaps even on another planet. Anyway, though the atmosphere was anything but relaxing due to said child, the food and service were wonderful. We splurged on jumbo shrimp for an appetizer, that was flavorful & delicious, and fabulous filet mignon for dinner that night. The filet was just perfectly cooked and served with a couple of superb sauces--one a peppercorn and one a Bearnaise. Wish we could have enjoyed eating it more, but constant screaming kind of puts a damper on things. And we didn't take photos of our dishes there. (Shrugs.)

Oooh, we tried conch chowder--which tastes almost exactly like Manhattan clam chowder. (Found out it's pronounced conk.) And, we loved it--had it a couple of times at a couple of restaurants, served with Johnny cake, (which I also loved). I was really afraid to try conch--it is a snail, after all, albeit an ocean floor one. And snails just do not appeal to me for some odd reason. Could it be because they slime their way across the terrain? Ick. But this snail was really, really good! BTW, we were told to try a place in Nassau to eat for some really inexpensive & authentic Bahamian food--which we had planned to do at the end of our trip--but the rain cancelled that for us! Sigh. Gary made eggs & toast instead. Which actually tasted quite good when we were watching the rain pouring down outside.
The best meal we had overall was at Bobby Flay's Mesa Grill. He has one in New York and another in Las Vegas. If you ever get the chance to go, do it, by all means! It is fantastic southwestern-type food! We had their goat cheese queso fundido with chips and their shrimp & roasted garlic tamale for our appetizers. Incredibly delicious! Then the New Mexican spice rubbed pork tenderloin was recommended as a signature dish for dinner. So we both had it--that meat just melted in your mouth. So flavorful & tender. Oh, yum! And for dessert we shared the sticky toffee pudding with salted cajeta and tres leches ice cream. We were so full we actually left a bite or two of that wonderful dessert. And then we rolled on out of there. (Forgot to take a photo of the dessert. Oops.) 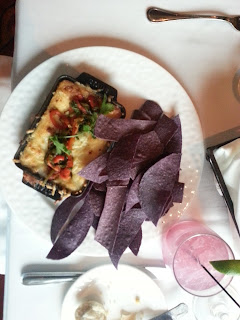 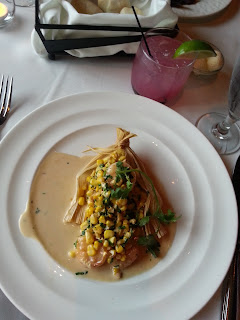 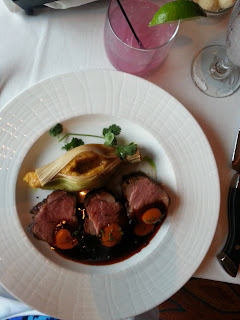 Have a funny story about the dress code, too. But I'll save that for another post. For now, I will just get to my card for the week.

I chose DP from the Bo Bunny Liberty collection and paired it with Stampin' Up CS. I distressed my DP with my Zutter Distrezz-It-All. I added some stars cut with my Spellbinders Classic Star dies, some jute ribbon, cheesecloth, a bow, a safety pin, and a MIC chipboard corner. My sentiment was created with a Dymo Label Maker. Voila! My card is done. And so am I.

Do check out the great S&S creations by my teamies! And please join us in the challenge. We'd love to see what you create! And have a great week! 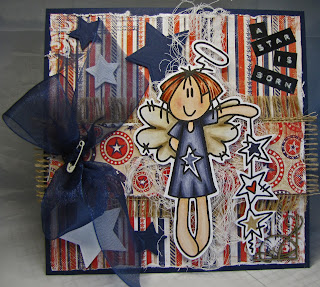