This week we are challenging you to create a card for an anniversary or a wedding. We'd like you to show off your silver or gold cards for couples. As luck would have it, our friends, Ed and Ellie, are celebrating their anniversary this month. So I was able to make a card for them that fit the challenge.

And, before I get to my card, I just want to catch you up on a few things. Gary and I went to Atlantis, Paradise Island, The Bahamas, on May 19th. We returned on the 30th. We had a wonderful first week. However, the extra days we spent there were so wet and rainy that I could hardly wait to get back to sunny, dry Arizona. OMG! I just don't "do" rain anymore. Especially if I am not at home where I can at least make a card or two. But sitting in a time-share suite, nice as it was, is not my idea of a good time for hours-on-end.

On the bright side, I did get a lot of reading done. I finished six books on our trip, and started the seventh on our plane ride home. And I haven't done that much reading in a very long time! That was delicious!

Speaking of plane rides, I think we had two that were sent from you-know-where. (And I am not talking about Heaven.) 'K, so the first one was delayed. We were supposed to take off at 5:25 a.m. Which meant that we had to be at the airport in the wee hours of the morning to get through security, etc. Fine. But when we checked our baggage we found out that there was a delay. Apparently, our pilot called in sick the night before. Due to regulations, they could not call in a new pilot until 4:00 a.m. And then he had two hours to get to the airport. Which meant he didn't need to be there until 6:00 a.m. Well, he didn't get there until 6:15, so we took off almost an hour late. And we only had an hour between connecting flights. Oh, help. I was fretting that one all the way to Charlotte.

But it gets better. There were the obligatory children on our flight. I have to say, the older I get, the less I want whiny, crying children in my vicinity. Just doesn't work for me anymore. Especially on planes, because you can't get away from them. The kids, I mean, not the planes. Well, I suppose you could get away from either of them. But it would take one mighty long step, and the landing would really, really hurt. Anyway, one couple got on with two pint-sized ones. Wouldn't you just know they sat across the aisle from us. The older one, a girl, was fairly well-behaved, for the most part. But the little boy, who must have been around two or younger, was a little monster. Crying, fussing, yelling for most of the trip. The parents kept passing him back and forth. I thought there was a nice spot out on the wing for him, but I didn't mention that, shy flower that I am. Oh, and they gave him a car to play with--you know, one of those fairly heavy metal ones--bigger than a Matchbox. And he threw it, barely missing the guy sitting in front of us. At least the parents had the decency to reprimand the kid and take the car away. Good grief. And thank heavens I have those wonderful noise-reduction headphones that I can play music on--they really help to drown out the kiddie noise.

BTW, we had a really rough, bumpy flight to Charlotte. Seems we were traveling through a lot of storms that were hitting the South--the day before Oklahoma was hit so hard.

Anyway, I was sure we were going to miss our connecting flight in Charlotte. Ah, not so much. Seems they had a problem with a door on that plane, which was being repaired when we got to the gate. I was not sure if that was a good thing or a bad thing at first. I mean, I really wasn't ready for the door to fly off during the flight, causing depressurization of the cabin and me being sucked out of the plane. That was never on my bucket list. But, due to the repair delay, we were able to make the connecting flight; and it got us to Nassau, sans screaming children and bumpiness. Which made me a very happy camper.

And our flight back from the Bahamas to Charlotte was a good one, too! I expected a rough flight since it was raining on the way up; but it actually wasn't too bad. And then our flight to Phoenix got re-routed, due to some storms, I think. Which made for a fairly smooth, although longer, trip for us.

However...as we were waiting to board our plane to Phoenix, (with lots of kiddies on it, btw), there was a small child, about two years old, that was screaming at the top of her lungs. Everybody turned to look to see if that kid was on our flight. And guess what. She was. She and her older brother were traveling with their mommy--who had no help in case of trouble. Oh, yeah, and there was plenty of trouble. The little boy was really pretty good and slept quite a bit of the way. But that little she-devil screamed for at least two solid hours as loudly as she could. And kicked the seat in front of her. I know this because, again, they were sitting right across the aisle from us. (Yes, it could have been worse. They could have been right behind us. Thank heavens for small favors. Right?)

Gary says it's my fault. Because I dread having naughty kids around us, I draw them to us like a magnet. And, he is probably right. I was so grateful when that little munchkin finally fell asleep. But then a little one two rows behind us awoke about a half hour before we landed. And screamed for the entire half hour. Sigh. I am sure that the air pressure on their little ears has a lot to do with the crying. I just wish their parents would pick another method of travel for them. At least on the days that I fly. Is that too much to ask? Really?

Alrighty, then, enough about the plane rides. I will tell you more about the trip on future posts. Consider yourselves warned. (Snort!)

Oh, and if you decide to take a trip to Atlantis, be prepared for the taxi ride out there from the airport. They drive on the wrong side of the street, with their steering wheels on the wrong side of the vehicles. (At least for us Americans.) And they drive fast. And they barely squeeze by the traffic. And they stop on a dime. So, it's kind of like taking a ride at the amusement park. And it'll cost you $35 before tip. But much cheaper than renting a car, which we really didn't need, as we used shuttle buses on the island. Just fyi.

Okey dokey. For my card this week, I decided to use a sketch from CLP, #59: 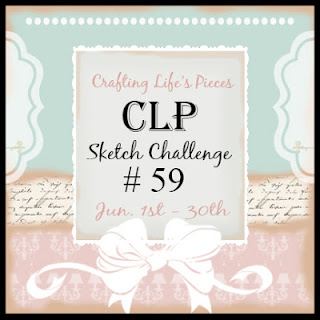 I distressed my paper with my Zutter Distrezz-It-All and Stampin' Up ink. My die cuts were made with the following dies: Spellbinders Labels 4, Memory Box Victorian Frame, and Cheery Lynn Bow & Bell. I also added a bit of Stampin' Up Vanilla Flower Trim. I created the sentiment on my computer. And that's it. Pretty short & sweet after all that grousing about our travel, huh? Good thing.

Do check out the creations by my talented teamies. And then, please join us with a card of your own! Really looking forward to seeing what you create! Have a great week. 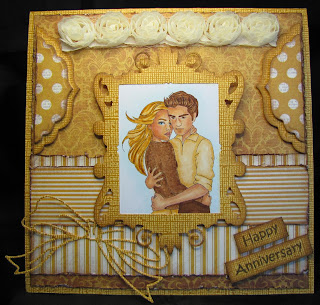