Just found out tonight that my Valentine for Gary was featured on the Outlawz for this week. Wow! What an honor! Goes to show that you just never know, huh? :^) Now, if I can just figure out how to get the badge for my blog! I am so technologically-challenged!

Last night Gary and I went to the Deli for dinner. Big shock, I know. (Insert Craig Ferguson's shocked expression here.) We had a delicious fish dinner and custard dessert. We shared. The dessert. Not the dinner. It was all wonderful. But the best part of the evening was when the bartender, Barry, (better known as "Poppy"), got out his accordian and started playing and singing. He's from New Jersey, of Polish extraction, and used to play at home while his kids were growing up. His daughter said they would dance around the house to the polka music Poppy played. I thought that was so cool. And he is pretty good at singing and playing his accordian.

The entertainment did bring up memories of my dad, who had a beautiful voice and played a mean trombone. He often sounded like Bing Crosby when he sang. And he played music by ear. I never could do that, darn it! But I remember enjoying it when Dad got his trombone out to play some new song that he had heard on the radio. One song in particular, that I remember, was "Stranger on the Shore". Gosh, that was a beautiful song then! Of course, Dad could light it up with jazzy tunes, too! Like "When the Saints Go Marching In", for instance. Fun days, those. (Insert big sigh here.)

Anyway, back to the Dancing Queen. By Abba. (I am dating myself, I know!) The challenge this week for the Outlawz Copic Group was to create something inspired by a movie, song, or book. And I just happened to have the cute Magnolia stamp "Dancing Queen Tilda". So, I figured I could create a card using her for the "Dancing Queen" song by Abba. Make sense? Well, it did to me at the time. LOL!

I stamped Tilda on Cryogen CS with Memento ink. I used Stampin' Up CS for the card and die cuts. The patterned paper is from Authentique's Blissful collection. Flowers are by Prima, with one die cut from a Tim Holtz Tattered Florals die. The brad is from Stampin' Up. I used oval and oval-scallop dies from Spellbinders. The flourishes were made using Spellbinders Floral Flourishes dies. The paper doll border was cut from a die by MFT. I used a Signo Uniball white gel pen to accent Tilda.

I hope everyone is having a wonderful weekend! I know I am. I get to go out to lunch with my siblings tomorrow. We are meeting our cousin and her hubby at a great little luncheon spot in Scottsdale. Our cousin in just in from Wisconsin, getting some R & R from the cold! Of course, to us in the Valley of the Sun, it has been just a bit wintery for our tastes. :^) It's all in what you get used to, I guess. Have a great tomorrow! 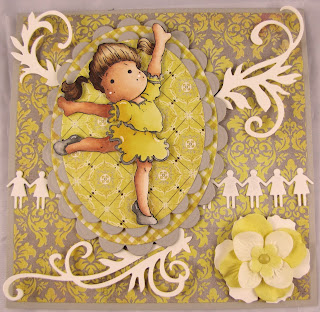