OK, Sister Merrilyn, do not read this blog post until after your birthday. That way you won't see your card before I give it to you! Fair warning!

I was going to start on my Valentines this week, but then realized that I'd best get moving on the two birthday cards I have coming up on the 10th. Both my sister, Merrilyn, and my daughter, Angela, were born on the 10th of February--although in very different years! HAHAHA! I remember when Angela was born; I was so excited that she was born on my sister's birthday. HOWEVER, my sister wasn't quite so thrilled. You see, that meant that our mom would not be fixing Merrilyn's favorite meal in Minnesota the following weekend for a birthday treat. Instead, Mom would be coming down to Georgia to help me with the baby after I got home from the hospital. So Angela and I ruined Merrilyn's birthday dinner. What a pity, huh? I was bitter at Merrilyn's reaction to my daughter's birth, (can you tell?), but I guess I can now let bygones be bygones. (What the he** does that even mean?) And I bet Merrilyn doesn't even remember all of that!  :^)

I know what Merrilyn would have asked to have for her birthday dinner that year. Mom's Italian spaghetti. Yes, the very same spaghetti that my daughter fixes for Christmas dinner every year. It is such a great recipe! Interesting that both Merrilyn and Angela have a thing for that spaghetti. Must be something to do with being born on February 10th. Or not. Remember, though, that Angela has put her own stamp on the recipe by putting veal in the meatballs. Gag me. I see that as nearly criminal. Really. Poor baby cows.

BTW, I did create a page for my Smashbook, as I mentioned on my last blog post. But I am not going to upload it to my blog because it is so dorky-looking. How dare I! Making a dorky-looking page. The nerve. Hopefully, I will create a page for the next month that reflects my true artistry. Oh, what a load of crap. My apologies...

Back to Merrilyn's card. I chose a darling La-La Land Crafts image: Beach Marci. Merrilyn swims every day for an hour, so the image seemed really appropriate. (I got such a kick out of the name of this company: La-La Land. In the 80's Gary and I were raising and showing Persians. We went to many cat shows in California. No offense to Californians, but after spending so much time there, we called it "La-La Land".) I digress. Sorry about that. Anyway, I had purchased some Best Creations glitter paper last summer called Splash Fun, which I thought worked really well with the Marci image. I decided that the Memory Box Elegant Scrollwork die looked really cute with the paper. I also used some Spellbinder's #4 Labels dies, and two dies from MFT: Double Scallop Border and Vintage Flourish. Cardstock is Cryogen for the image and Stampin' Up for the card and diecuts. The ink used for stamping was Memento. The sentiment is from Stampin' Up's Teeny Tiny Wishes. Stampin' Up Basic Rhinestone Jewels were added for a little sparkle. I accented Marci's flower with Star Dust Stickles, her inner tube with Glossy Accents, and also used a Signo Uniball white gel pen on her. She was, of course, colored with Copic markers:  YR00, YR12, YR15, R81, R83, R85, B0000, B12, B14, B16, Y11, Y13, Y15, E0000, E000, E00, E11, E13, E25, E31, E50.

I am entering this card into the Outlawz Friday Copic challenge:

Here's wishing everyone everywhere a great weekend. And, if you're watching the Super Bowl, go Giants! :^) 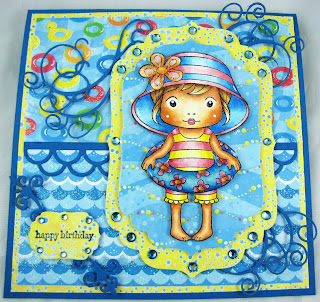