I already made a get well card for my sister, Barbara, this year. She had knee surgery in April. Well, that didn't fix what was truly wrong with her knee. Because nothing could. She needed a knee replacement, which she is going to have in September. I don't know about you, but I don't think I'd be too happy about that. In fact, right about now, I would probably be spewing some unmentionable words and phrases, (what me, swear? pffffft). But my sister is much nicer than I am.

Anyway, Barbara, if you want to spoil the surprise, keep reading and look at the photo. If not, just wait until Merrilyn delivers the card to you, or until your surgery is over.

I know there are some housekeeping issues I need to mention. Well, not my housekeeping, because that is unmentionable. But just little tidbits that I have to tell you about before I go on with the card description. First, I can't get my chair to fit me comfortably right now. I don't know if it is because I was up late last night, (or until early this a.m.), and my back and neck just ache from bending over my image for so long. Which reminds me--I had the image almost completely colored when I realized that I had irrevocably ruined the dress. So I had to start over, and with this image that is something you do not want to do if you are in a hurry! Because, as cute as she is, Saturated Canary's Circus Trixie is a complicated girl to color. Where was I? Oh, yeah, the chair being uncomfortable. Other reasons that it could be uncomfortable are lost to me at the moment. I forgot what I was going to tell you. That is either a result of me being terribly tired, or just plain old. I opt for the terribly tired.

Also, I wanted to tell you that Gary is not a happy camper right now. His Fusion hybrid wouldn't start the other night when he left work. Yeah, the night we were supposed to go to a wine dinner. And you know how much I love my wine dinners. This was held at the restaurant in our community clubhouse. And the menu sounded sooo good. Drat! So I wasn't very happy about his dead battery either. It meant not only missing the wine dinner, (just a few blocks away), but having to drive in 30 miles to pick him up from the Ford dealer. Late. Like leaving the house at 7:00 p.m. Which meant we were going to eat really, really late. We managed to stop at Roy's about 8:00, so we had a good meal after all. Just not the one we planned on. Oh, and for the foodies out there, I started my meal with a Mai Tai instead of wine. Because it reminds me of Hawaii, and we were at Roy's after all! Then we had the edamame. Because it was free. Otherwise, I would have gone straight to dessert. Naw, not really. Actually I had the most delicious, melt-in-your-mouth Hawaiian Ono, served with Thai Basil Mint Nam Plah, grilled peaches and a chilled veggie-and-rice-noodle salad. I am sorry I missed the wine dinner, but I am not sorry I got to substitute this meal instead! And we did not have dessert--yay, us! (Gary had delicious shrimp, btw.)

But I didn't tell you why Gary is not happy. It's because the Ford service manager told him that a lot of Fusion hybrids won't start in our excessive heat, in order to protect the main battery. I say, what? I repeat, what? Why on earth do they sell the cars here in the Arizona desert, then, if they can't tolerate the heat? Heat is all we have, People. We live one mile from He**. Literally. Awwww, no, figuratively speaking, but still, it does get blazing hot here in the summer. All summer. Every year. So why would anybody want a hybrid car whose battery has a heat phobia? Please, enlighten me. And while you're at it, you can enlighten my hubby. Or possibly you could just take him off my hands for a week or three. Thank you.

Alright, enough housekeeping whatevers. On to Barbara's card. I already mentioned that I used Circus Trixie from Saturated Canary. My sentiment is from Create with TLC. I printed both on Copic X-Press It CS. I chose my colors from the Bazzill Basics Paper Vintage Marketplace collection. My CS is from Stampin' Up. Since Circus Trixie is standing on a round trapeze, I had the bright idea to use a circular easel card, as well as die-cut hoops. I am being a bit sarcastic about this being a bright idea. You see, I not only had to color my image twice, I had to make the easel card twice also. And I am not going to get into that right now. My head might explode if I have explain that. I used Spellbinders Grand Circles, circles, and hearts dies, as well as a Cheery Lynn Lace Corner Deco B die. I added a bit of cheesecloth and Wild Orchid Crafts pins, flowers, and crystal heart stem. I don't usually mention this, and I don't know why I am right now, (especially when I am running late), but I did some pop-dotting on the image and sentiment. (I do the pop-dotting fairly often, actually. BTW, what is the proper terminology for it?) I added Glossy Accents to Trixie's eyes, (which must have hurt), and her lips, (which probably just felt weird). I accented her clothing with a white gel pen. Of course, I colored Trixie with Copics: E000, E00, E11, E31, RV00, RV11, RV13, BG11, BG72, YR21, Y11, Y21, YG0000, YG11, YG13, YG17, YG63.

I did a circus image to fulfill the The Outlawz CPC Circus/Carnival requirement. My shaped card meets the Stamptacular Sunday Shape It Up challenge. The paper selection came about due to the Papertake Weekly Spots 'n Stripes challenge. And I am also entering this card into the Digital Tuesday Child's Play challenge.

That should just about do it for today's episode. I'm sure you are just as surprised as I am that I managed to blog again so soon! 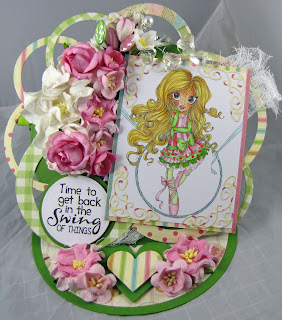 BTW, a big shout-out to all my readers who enjoy my wacky sense of humor. So glad you do--but, just remember, that makes you just as bizarre as I am. Just sayin'.