I managed to finish my nephew's card in time to drive it, along with my last two cards, up to Scottsdale to my sister's house. She will deliver them for me this week to the Midwest, where she and her hubby will be vacationing. I caught her vacuuming her house, (remember she just had knee surgery a scant month ago), in preparation for her house sitter. That is an odd expression, isn't it? House-sitting. Of course, there is baby-sitting. And pet-sitting. None of them really make any sense to me. I mean, what does the sitting part actually mean? Besides a person just planting their butt in a chair and waiting for Godot. Hmmmm.....I'd say inquiring minds want to know, but I am actually pretty sure they don't give a flip.

Oh, back to Merrilyn. She was cleaning her house. She is moving around so good now, it is almost hard to believe. The only thing holding her back is her other knee, which needs replacement as well. She is back to her hour/day swimming schedule. Which blows me away. I have two good knees, and spend no hours a day swimming. Or much of any other exercise, for that matter. Of course, it shows, People. It shows. Anyway, a big shout-out congratulations to my sister, Merrilyn. And may your vacation be absotively, (that's a combination of positively and absolutely, in Penny-speak), mahvelous!

I got to Merrilyn's so late in the day that I called Gary and asked him if we could meet somewhere for dinner. (He works 30 miles from home and M lives 30+ miles from me in sort of the same direction). We agreed to eat at The Dhaba, in Tempe. Love, love, love that place! The food is always first-rate! I told Gary I didn't care what we ate, I was just starving. The owner heard me say that, so she brought us extra papadum--yum, yum, yum! And Gary chose Sheikhupura Aloo Palak, (potatoes and spinach in a delicious sauce with ghee), Chicken Curry, (which was spicy even at the mild end (DUH!) and so satisfying), naan, and basmati rice. Of course, we both had some of their chai, which doesn't need any sweetening. A spicy delight. Ahhhhhhh.

When I got home, I found the invitation to Mike's surprise birthday party in the mail. SHHHHHH! Don't tell him about it. Yes, that's what the invitation says. Don't mention it on Facebook, Twitter, tagging, etc. Well, I won't have a difficult time with that. I barely get on FB, I never Tweet, and I don't even know what tagging is. I must be out-of-touch. (Gary has told me that for years. Decades, actually. And still he stays with me. Why, I wonder?) Anyhow, I spend waaaaay too much time on Blogger to try any other form of correspondence.

So, the reason Mike is being given a surprise party is because he is turning 50! OMG. Five-oh. Really? Already? I remember changing his you-know-whats--and that seems like just yesterday. Well, not quite yesterday, but not fifty years ago!  (Yes, I realize this dates me, but age is just a number. Waaaaa! And mine is a really big number!) Anyway, when he was about two weeks old, I was baby-sitting him, (there's that word again! I repeat, I did not sit on the baby!). And he had poopy drawers, so I laid him down to change them. And when I pulled them off of him, he peed on me. Yup. I hadn't learned the trick to keeping dry when changing a boy. A boy's diaper, I mean. (I don't know what I would have changed a boy into. Honestly. You people get so literal!) So after I finally got him (and myself) cleaned up, I picked him up and he immediately threw up on my shoulder, (I think we called it spit-up in those days).  And considering that he was always crying, his nose and eyes probably emptied on me as well, so he'd probably gotten me with every orifice he had. Little brat.

The crying wasn't really his fault. He had tummy aches from everything they tried feeding him. Formula, cow's milk, bat's milk, sheep dung. OK, the last one was a slight exaggeration. (Alright, the last two were. Picky, picky.) I don't know what finally settled him down, but I remember Merrilyn and I walking the full length of their apartment with Mike over her shoulder, saying "chug-chug, woo-woo", over and over and over and over. It was all that kept him quiet. Nearly drove me to the funny farm. Oh, thank heavens he wasn't my baby! Oh, and for those of you who are saying that he should have been on breast milk, just wait a second. That's most likely true, but doctors did not promote breast-feeding in those days. It was too risque, I think. That was in the days of the boobalicious movie stars, but before nude scenes. Exposing your entire breasts was rather frowned upon, even for breast-feeding. My, how times have changed...

Now to Michael's card. He is a U.S.P.S. worker. In other words, a mailman. So I had to do a mailman card for him. First, I found postage stamp paper in the Prima Songbird collection, which I promptly covered up with stuff! (Why? It apparently seemed like a good idea at the time.) Second, I found a crazy-cute postal worker image--Snail Mail, by MayzyArt. I realize that the fairy on the snail's back looks a bit like a girl, but I used it anyway. I printed that on Copic X-Press It CS, and used Stampin' Up CS for the card base, layers, and wings. I used Bazzill Kraft CS for the tickets. And I used Gina K CS for the stamps, which included the sentiment. I had to put some sort of age-related sentiment on the card--he is turning the big five-oh, after all. So I found this one in the Geezer Power collection at Create with TLC. I think it works well with the image, too! And though I didn't photograph it (and can't now because it is gone), the inside used a TLC Geezer sentiment, too: "Welcome to the Black Socks with Sandals Years". I think that is hilarious! (Remember, I live in AZ. And you wouldn't believe how many men we have here that resemble that remark!)  It ought to, (pardon the expression), p*** Mike off, big-time. Payback, Baby!

I bought some Whimsy postage stamp sentiments to use with their dies. Specifically to use on Mike's card, but also for future projects. I love these! So I added a couple to the card front, along with a couple of tickets I produced from Whimsy products. Two buttons, a Tim Holtz mini paper clip, a bit of We R Memory Keepers baker's twine, three shells, and die-cut wings, (from a Memory Box die), were the only other embellishments I added. What? So few? I know. Believe me, I tried out many other design elements, but kept coming back to just these. Oh, I guess I forgot to mention that I used a sketch for the card design this time. Sometimes sketches make it easier for me; sometimes they make it more difficult. Since I was up until 4:30 a.m. (again) working on this card, I think it made it tougher, But I am so tired I wouldn't swear to that.

Where was I? Oh,, yeah, the sketch I used. It came from the Sketch Saturday Challenge. And I didn't follow it exactly, but it is fairly close: 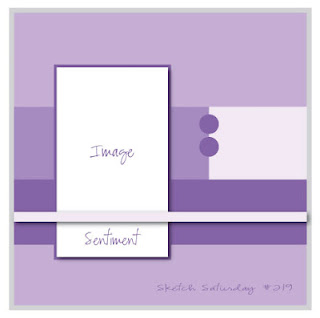 Okey dokey. That does it for now. Perhaps for later, too. Only time will tell. Seriously? Uh, no.

Besides Sketch Saturday, I am entering this card into the following challenges:

Here's wishing you a great rest of the week! 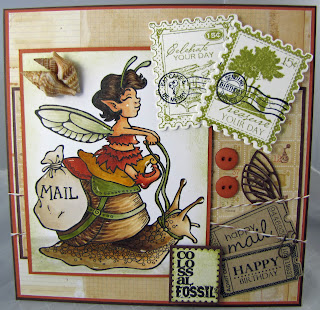