So, this month we have gone out to eat quite a bit. I know, so what is new, right? But I thought I would bring you up-to-date on the new restaurants we visited. (Yes, we went to the Deli several times, but that doesn't count as a 'new' restaurant; yes, the food was great at the Deli, as usual). Anyway, we had this dining card to use, which gave you a buy one meal, get one meal free. So we used it three times in the past two weeks, mainly because the card is going to expire on November 1.

The first dining card restaurant we visited was J & G Steakhouse at the Phoenician. We were on the fifth floor of the resort, seated next to the window, with a beautiful view of Phoenix and the sunset. We got to watch planes landing at the airport, which was rather pretty at night. But the best part was the food. Sensational! If you get the chance, do try this restaurant. I know it seems like it would be just another steakhouse, among many, but it really isn't. Gary started the meal with chilled lobster, served with a lemon aioli; I started with a steamed shrimp salad, served with avocado and mushroom champagne vinaigrette. OMG, OMG, OMG. I think I could have made a meal of that salad if it had been larger. It was that good! We then both had steak--hey, it's a steakhouse! The filet is so thick, tender, juicy, oh just so delicious! It was served with four different sauces, all of which were wonderful; but I think my favorite was the black pepper condiment. Oh, my, so tasty! We had side dishes of asparagus and potato gratin; the asparagus was very good, but the potatoes were not to be missed! Really. We were so full that we finished the meal with a light sorbet. Stuffed we were when we left.

The second dining card restaurant we visited was Wright's at the Biltmore. We went with friends, John and Carol, and had a very fun evening. The food there was also wonderful. Gary and I both started our meal with the lobster bisque, served in a puff pastry--very yummy! For main courses Gary had the scallops, which he loved; and I had the filet (with mushrooms and vegetables), which was really superb! My brain told me at the beginning of the meal that I could eat a chocolate souffle at the end of the meal. Well, not so much. I was so danged full that I could only manage to eat about half of my dessert. Unheard of! Sacrilege! And it was sooooo good! :^) I also had a wonderful laugh at the end of the evening. Carol and I stopped to powder our noses (yeah, right), and when we came out Carol asked the guys if they were looking for us. Quick as a whip, John said, no, they were waiting for someone much younger. Now, it may not sound funny to you, but it tickled my funny bone something fierce. Probably because it seemed so un-John-like. I laughed. A lot. It was a mighty good thing I "powdered my nose" first, or I could have had a serious accident! I laughed until I cried. I must have made quite the exit from the resort. Oh, well, it's not like I'll be going back there again anytime soon. They aren't on this next year's dining card! LOL!

We visited T. Cook's at the Royal Palms just last night. I've got to say, it was my least favorite of the three on the dining card. We started with soup--Gary had lobster bisque again, and I had the evening's fall special of carrot and ginger. Both soups were wonderful. Then I ordered the lobster entree, and it left something to be desired--like tenderness and true lobster flavor. Gary had lamb and thought it was good. But neither of us was blown away. We finished the meal with hand-rolled truffles, which were my favorite part of the meal. They were excellent!

Not on our dining card, (and much more casual), but a great place to go is The Herb Box at Southbridge. We met our dining club for the monthly get-together and had such a great time! We laughed so much (at very inappropriate dinner conversation), that the people at the next table asked to be moved--to the patio outside, no less. They wanted to get as FAR away from our group as possible. But our waiters just laughed and said that our group was fun for them. So, what the heck. The food was really good--we had fried stuffed olives for an appetizer. Never tried those before, but will have them again. Tasty! Then I had the jalapeno-marinated chicken entree, which was wonderful! Tender, juicy and flavorful. Gary had butternut-squash enchiladas, which he really enjoyed. We finished with the apple-topped bread pudding, served with salted caramel sauce and salted caramel ice cream. Yup, another OMG! Gary said it's the best bread pudding he's ever had. If you try the Herb Box, be sure to try this dessert. It will make your day! :^)

I enjoyed the Herb Box dinner so much that I went back there for lunch with my sister, Merrilyn! Hi, Seestor! I had the day's lunch special of blackened fish tacos--fabulous. She had a chicken wrap, which she liked, although I think I enjoyed my lunch more than she did. Then we shared the bread pudding, and she said it's the best she's ever had, too! Soooo good.

Well, that's enough food talk for now. I have a card to post for the CMC Bookendz Book Club. The book for October is The Mercy of Thin Air by Ronlyn Domingue. I loved this book. I read it twice in one month; mostly so I could figure out what kind of card to make for it, but also to refresh my memory for our book discussion chat. It was such a unique story--I highly recommend it for reading. 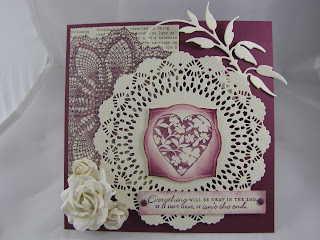