After the lunch and Larry's birthday card

Yesterday was lunch with "old" friends (and one new one) at the Deli. Of course, the food was delicious. When isn't it? But the company was the best part--it was good to see everyone again and to meet Faye. (I think I need to hire her, because she spent time, and paper, giving everyone my blog address. Thank you, Faye! But you must work for free. I do.) And I was grateful to talk to Maureen and find that she truly seems to be at peace with herself. I admire your fortitude, Maureen; I think, if I were in your position, I would be a basket case. I hope I never have to find out.

That's one argument Gary and I have had since before we were married. Neither one of us wants to be the one left behind. And I would say that it would be lucky for us to go at the same time, but that would really hurt our daughter, so I cannot wish for that to happen, either. Well, maybe a vampire will bite both of us and we'll live together forevermore. Hmmmmm.....nah.

A word to you gals about Bolero's at Seville. I think I mentioned the free dinner that Gary won for 1st place in his spinning class. Well, we went last night and had the free meal. And let me tell you something: I would have sent it back if I had paid for it. I had the filet with mashed potatoes and mushroom gravy. The steak was TINY, the potatoes were cold, the gravy was congealed. Basically, an ugly mess. If I had paid the $32 they charged for the meal, I would have made the chef redo it. I just picked at the potatoes. So I had two minuscule pieces of meat for dinner. Yeah, don't expect to see us going back there anytime soon. And, if Gary ever wins anything else for Bolero's, I will give the meal away! *&$%#^%$$^&#*

Now to today's card. This is the third week for my guest designer spot on the March Outlawz Copic/Promarker Challenge. The challenge this week is humor. Which, you all know, I don't have a sense of. (Well, actually I don't have much sense of anything. Just ask Gary.) Anyway, this was a particularly difficult, (almost impossible), challenge for me. To do a humorous card. Especially since, at the time I had to make it, I had nothing funny to stamp. So I went to the Internet and typed in 'humorous stamps'. Yes, it was that easy. I could pretend that I have a funny bone by buying one of the suggested stamp sets. So I did. Pretend. And buy a stamp set.

Actually I did get a kick out of the Penny Black stamp set that I bought. It even looked like something that my brother would enjoy, so I decided to make it into a birthday card for him. He has a very dry sense of humor. Not as dry as mine, which is parched, but dry, nonetheless.

On to the card components:  I chose Penny Black Pieces of Quiet for the image and sentiment, and stamped them on X-Press It blending CS with Memento ink. This was mounted on Stampin' Up CS and Lily Bee Design Picket Fence designer paper. Stampin' Up ink was rubbed around the image and the sentiment. I punched the corners of the sentiment with the Stampin' Up Ticket Corner punch. My dies for this card were Spellbinders Circles, Grand Circles, Scalloped Circles, and Stars. I also used a Marianne Designs Bird Scissors die. The die-cut scissors and the image scissors were coated with Glossy Accents. The image was accented with a Signo Uniball white gel pen. And my Copics were: Y00, Y02, Y06, BG70, BG72, E0000, E000, E00, E02, E07, E09, E11, E13, E25, E31, E50, C00, C0, C1, C2, C3, and C4.

I am entering this card into an anything-goes challenge:

I am meeting Gary in Scottsdale tonight so that we can give my sister, my brother, and my niece's mom their birthday cards and gifts. You have seen two of those cards; the card for my sister, Barbara, will be up at the end of the month.

As I write this, Peyton Manning is contemplating his future as a quarterback with the Tennessee Titans, the Arizona Cardinals, or the Denver Broncos. If you don't watch football, you probably don't know this, nor do you care. But I gotta say, we are mighty anxious Cardinal fans in the Mull household. And we are not alone. Fans of all three teams have to be on edge until the decision is announced. If I were a betting person, which, thankfully I'm not, I would put my money on Tennessee. (Although my wires, as Gary calls them, say he is coming to Phoenix. Oh, and those wires are dowsing rods. Bet you didn't know I had those, did you? Well, Gary asked me to use them to see what they would show. I still don't believe it. But by the time you read this, we may know if they are right or wrong.)

Also, we are still watching the Game of Thrones series on DVD. It is quite true to the book and really grabs you. Gary loves it! I do, too, except for the explicit nudity and gory battle scenes. They look so realistic that I have to look away while they are on. Apparently I am a prude and a sissy. And I have no sense of humor.

Note: I entered the sympathy card I made for Maureen into the Saturated Canary doily challenge. My number was drawn to win three digis of my choice from Saturated Canary! Woohoo! I love those digis! :^)

Wishing everyone everywhere a fabulous Friday! 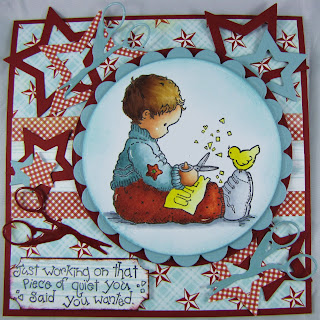