Heads-up! Not a card.

This is going to be a very strange post, even for me. Which means it is way out there in left field for you. Or possibly right field. Actually, it could be center field. Sorry. I digress again. I do that a lot. Or hadn't you noticed? (Clearing throat now.)

OK. I would like you to take a good look at the following photos: 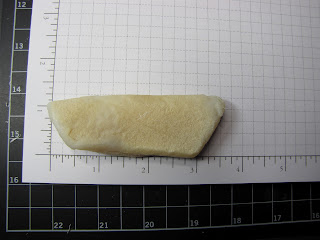 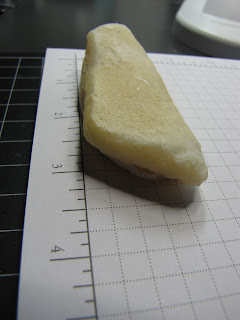 These are both photos of an ABC rawhide dental chew, (sitting on grid paper that is measured in inches). I say ABC for "already been chewed". By Donovan, my dog. Yes, he was given this chew to gnaw on to help clean his teeth, as it was covered in toothpaste.

Yesterday, I gave this chew to Donovan. He proceeded to work on it quite diligently until he had it softened enough for it to fold over. So he could swallow it whole. Yes, I said whole. Please, remember, Donovan is a Maltese. He weighs 7-1/2 pounds soaking wet. Or dry. Whatever. The point is, he is a small dog. And, as you can see from the photo, that is a large piece for a small dog to swallow. Who am I kidding? I couldn't even swallow that large a chunk of something! Not only is it 3-1/2 inches long and 1-1/4 inches wide--it is also 1/2 inch thick.

So, is it any wonder, that immediately after swallowing this, Donovan began to scream--loudly. He was in my craft room with me, and Gary was just driving into our garage (fortunately). I knew what had happened immediately and tried to grab the chew out of Donovan' throat, but couldn't reach it. So I yelled for Gary when he walked in the door, explained what happened and said we had to go to the vet. Immediately. So he called our vet and said we were on our way. I managed to grab my purse but not my phone. So, during the following 6-hour ordeal I had no way to contact the outside world. Or play a game of solitaire. Or check my emails. Or comment on blog posts. Oh well....

Anyway, Donovan was retching, and his little sides were heaving so hard. And all that came up was foamy liquid. I had no idea how large a piece he had caught in his throat at the time. If I had, I probably would have fainted. (Or maybe not. Sounds melodramatic, though, doesn't it?) He threw up on me a few times on the way to the vet, and was having trouble breathing. When we got there, a tech saw me and opened the door up and took Don out of my arms. She went to the back with him, and I sat down and started crying, so the receptionist quickly ushered me into an exam room. Where I really fell apart. Crying like one does when your pet dies. Because that's what I was afraid was happening. Gary came into the room and just held me and let me cry.

I am not going to go into all the details, because that would make a small novella instead of a blog post. My vet couldn't help Don other than to give him oxygen and pain medication. She also took x-rays and said that the chew was stuck in Don's esophagus, and that we would need to go to the Emergency Animal Clinic to have it removed with an endoscopic procedure. The chew was pressing on Don's trachea and making it hard for him to breathe. But somehow he was getting lots of air into his stomach, causing even more problems. Wonderful. When they handed him to me, it felt like he was a pregnant dog about to give birth--that's how distended his tummy was. Sigh...

Donovan cried all the way to the clinic, which took a good 20 minutes. Even with Gary speeding all the way. A specialist had been called, by the clinic, to do the procedure--but they were waiting to see Don and give us the charges to OK before the specialist would come to the hospital. Well, we got there at 8:00 p.m. and the procedure started about 9:15, I think. (Somewhere in there Gary ran to Burger King and got me a salad and himself a burger. We were starving! But I barely ate anything. I was too nervous.) At 10:00 the E.R. vet came out to say that Don was fine, there was no damage to his esophagus, and the specialist had removed air from his tummy to make him more comfortable. She showed us the chew, (which stunned us to say the least), and asked us if we wanted to take it home with us. Heck, yeah! We had to have something for show-and-tell.

We were told that Don could go home a little after 11:00, so with another hour to kill, we left and went down the street to a wine bar. (What a surprise!) We each had a glass of wine and split a dessert. Then we went back to the hospital and paid the bill. Well, actually that's not quite true. We paid the estimate before they would do the procedure. And the estimate included charges for an overnight stay. But, since we could take him home right away, we actually got a credit on the charges. And then they brought Don out, looking ever so groggy. I was so glad to see him no longer in pain! To add up the charges: our vet cost $429.84, the specialist charged $1000 for the endoscopic procedure, and the emergency clinic charged $585.52. Oh, and $7.52 for some special canned food he needs for the next few days. And we had to buy some Pepcid AC. So that "ABC chew" has now become the "$2000 chew".

Don was pretty out-of-it on the way home. But at least he didn't cry or hurt anymore! I must mention, that right after we left the clinic, Gary slowed way down at an intersection, and I asked him what the heck was he doing. He replied, "You need to slow down at intersections and look both ways." Remember this. Then, when we got off the freeway, Gary stopped at a Quik-Trip to see if they had Pepcid AC, which they didn't, (and I told him not to stop because they wouldn't have it. But you know men, and how they gotta do what they gotta do!)

Well, when he drove out of the Quik-Trip, he turned right into the far left lane. And all of a sudden there are flashing lights behind us. Yup. You got it. A highway patrolman was pulling us over. It just doesn't get any better than this. The cop said that Gary didn't come to a full stop before turning, and he turned into the wrong lane. So, while Gary got out his driver's license and vehicle registration, we told this nice young man our sob story--fortunately the dog was in my lap, for evidence. The cop said he hoped Don would be OK and then went back to his car to write up a warning ticket. Apparently, Gary checked out as an all-around wonderful guy, so the cop just handed back the license and registration without any ticket. And we were on our way once again. I must mention that I started laughing my butt off because Gary had just given me the lecture on slowing down through an intersection and looking both ways. Then he manages to miss a stop sign and turn into the wrong lane in front of the highway patrol. What's wrong with this picture? (And we didn't get caught for speeding to the clinic, for which we would have received a "real" ticket. Good grief.) And what an appropriate ending for the evening, hey? An evening that ended at midnight, for that's when we finally got home.

Don is doing very well today. He's very quiet, but has eaten a small amount and has taken his meds (oh, yeah, Gary went out to get Pepcid AC for Don before he left for work and bought the wrong thing. Which I found out when it was time to give it to Don this morning. So I raced to Walgreen's and got the right stuff and raced back again. Jiggety-jig.)

I will have a new post tomorrow with an actual card! And if you got to this point, Donovan thanks you. So do I.

P.S. We saw such an exciting finish at the Cards' game on Sunday! And we won! There's always a bit of bright news mixed in with the not-so-much in life, huh?