Gosh, has it been a whole week since I last posted? How time flies when you're having fun.

I did have a couple of people who wondered about the miniature horse at the party last weekend. Here's the scoop: we went to Dave's. Dave is a guy Gary works with, and Dave has a horse property in North Scottsdale. Dave's wife, who is originally from Texas, wanted a horse. Now the property isn't really huge, so I guess they felt they should get a miniature horse. Or else they wanted one. I don't know which.

Personally, I feel a miniature horse to be a bit useless. If you weigh over 100 pounds, you cannot ride it. So it just eats lots more than a dog, poops lots more than a dog, but can't come in the house like a dog. So what good is it? And let me tell you, this horse is annoying. It will kick the paddock door if the family, or friends, are outside. Because it wants to join them. So, it gets let into the yard, then comes up on the patio, and it proceeds to try stealing your food. Or whatever else that is not nailed down. Not my idea of a good time. (And this horse is very insistent.) I found myself drawn to the kitchen, where it was cool. And horse-free. Thank goodness. So that's the story of the miniature horse. Aren't you sorry you asked?

On Saturday we went to the Cardinals preseason game against the Dallas Cowboys. Gotta say, there was so much blue in the stands, that you would have thought we were in Texas, instead of Arizona. But there is a good reason for that. Long, long ago, before there was dirt, before Arizona had a pro football team, the Cowboys were the team many Arizonans chose to cheer for. And, unfortunately, many of those people still cheer for the Cowboys, especially when the team comes to Arizona. Ugh. It's hard to see so many people cheering for the "wrong" team. Not that any of us had much to cheer about--it was a really sloppy game, best left in the preseason.

OK, enough drivel. On to my card for the week--which, btw, my hubby doesn't like at all. Old poop. Anyway, as long as our creations were monochromatic, and had a greeting, we were left free to do whatever. And my whatever was a die cut design. I chose all Cheery Lynn dies for this card, and added a Create with TLC sentiment. The dies I used are:

I am going to enter this card into the current Cheery Lynn Challenge, which is to use doilies.

I feel like a cheated a bit, since I used only white, but that's the breaks, huh? I hope you check out the beautiful monochromatic designs by my talented teamies, get some inspiration, and then enter our challenge. And be sure to have a really wonderful week--I know I intend to. 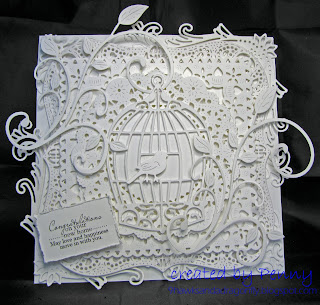