Happy Friday! And a fine howdy-doodles to you all! If you have missed my comments for the past couple of weeks or so, it's because we were on vacation again. Yes, I said AGAIN. Really, truly, loved it, but almost too much travel in a short space of time. We had to cancel a trip to Cancun in October, so had to use our airline tickets by April 2nd. After we returned from Maui on the 9th of March, we had three weeks at home before going back to my beloved Big Island in Hawaii for another 10 days in paradise.  Tough life, but somebody's got to live it, and it might as well be me. Snicker, snort...

I will be back in the swing of things shortly and return to commenting on all the fabulous blog posts that I missed--while sitting on my lanai, contemplating my belly button, as I listened to the surf of Keauhou Bay. Ooooh, this was such a relaxing trip. We had great food, at several fairly inexpensive restaurants, (inexpensive for Hawaii, anyway), and lots of lazing about. I managed to read 7 books during the trip. Lots of it done on my 4th floor lanai. Listening to the waves. Sigh...

We went to the top of Mauna Kea, (13, 796 ft.) to see the observatories up there, and look at the stars through a portable telescope, which was really fun. Did you know that stars don't twinkle when you get up that high? Amazing. It was really hard to breathe up there, though. I felt OK other than that, but it was a good thing they stopped at 9,000 ft. to acclimate us for an hour before heading for the summit. Gary suffered dizziness for several minutes, but finally felt OK enough to go topside with the rest of us. What a trip! And there was quite a bit of snow up there. Hilarious. You are about 30 miles from the beaches and you can have snowball fights. Well, you could if you could breathe well enough to bend over and make one and then throw it. I simply kicked a bit of it, just to say I touched the snow on the Big Island. (Bending over was out of the question--tough for me to do on a good day at sea level, doncha know.) Loved this excursion as it was so different than anything I had ever done.

Then there were 8 sea turtles sleeping on the beaches, which were so much fun to see and photograph. And I saw a Manta Ray swimming at night in the lights at the Sheraton at Keauhou Bay. Plus, the most wonderful, magical morning for me was spent watching a pod of two dozen or so dolphins playing in the bay, complete with them spinning and swimming with the snorkelers there. (Gary spoiled me with an ocean-front room upgrade for our stay there! Fantastic!)

We did not go snorkeling. Took our gear with us, expecting to go on at least one snorkeling trip. And then, on the flight over, a cold sore popped up on my lip. Whaaaaat? Really? On vacation? Fortunately I had some cream with me, so I started that right away. And the next day got an oral prescription, called in by my Arizona doctor, which kept me from blossoming into a nasty, blistered mess. However, the cold sore didn't disappear until the last day we were there, so I had a very sore lip, which would have hurt while wrapped around a snorkel mouthpiece. Ergo: we did not go snorkeling on this trip. That was the only bummer about the trip, though, as we had lovely weather and met some nice people. And ate great food. Did I mention the yummy food we had???

Will blog more on Monday with some photos to show you. Oh, and after we returned our water heater started shooting water out of the top of it, which is a weird place to leak, don't you think?. (Thank heavens it was after we returned and not while we were gone!) I was annoyed, but not angry. And I earned my annoyance, as this was our second water heater in less than 5 years. Cheap piece of crap that Shea Homes installed, and even cheaper piece of crap that was replaced by Riggs Plumbing. Yes, I am naming names. The original water heater lasted only 3 years, and the replacement a mere one+ year. Not the end of the world, but annoying anyway. Oh, well, we are having a very good model installed today--thank goodness, as I am getting ripe waiting for my hot-water shower. Ooooh, TMI? Sorry...

So, our new challenge is a color/photo inspiration, which I ran with to create my sister and BIL's anniversary card. Hopefully, she won't look at this today, as her anniversary isn't until the 27th.

Our April sponsor is Sweet Pea Stamps, whom I love, love, love. I have taken advantage of their sales to get more of their images. You should, too, if you don't win this month's prize of 4 digis, because there are such wonderful artists at Sweet Pea, and there are a bajillion fab images to choose from. (Well, that might be a slight exaggeration.) Anyway, do check out the website!

The darling image I chose this week is Sweet Pea Stamps First Kiss by Conie Fong. I thought it was such a cute image to use for a couple celebrating 53 years of wedded bliss. (Snort. They are happily married, for sure, but nobody has that much wedded bliss. Gag me.) I printed the image on X-Press It BC and colored it with my Copics:

My DP is from My Mind's Eye Collectable Remarkable collection, and it was paired with Stampin' Up CS. I used a Whimsy Corner die and a Cheery Lynn Daisy Strip die for the corners and flower, along with an SU brad. Pretty simple, hey?

In case you didn't see it above, the Big Island is home to so much yummy food. Many restaurants use island-grown, fresh ingredients. My favorite things to eat or drink over there: avocados, macadamia nuts, grass-fed beef, and Kona coffee--oh, my, yum, yum, yum, yum, yum. And then there were the delicious Mai Tais, too. Sigh...

Be sure to check out the beautiful inspiration from my talented teammates: Carla, Kathi, and Laine! And then play along with us by coloring an image for your project, using the medium of your choice.

Have a wonderful weekend! 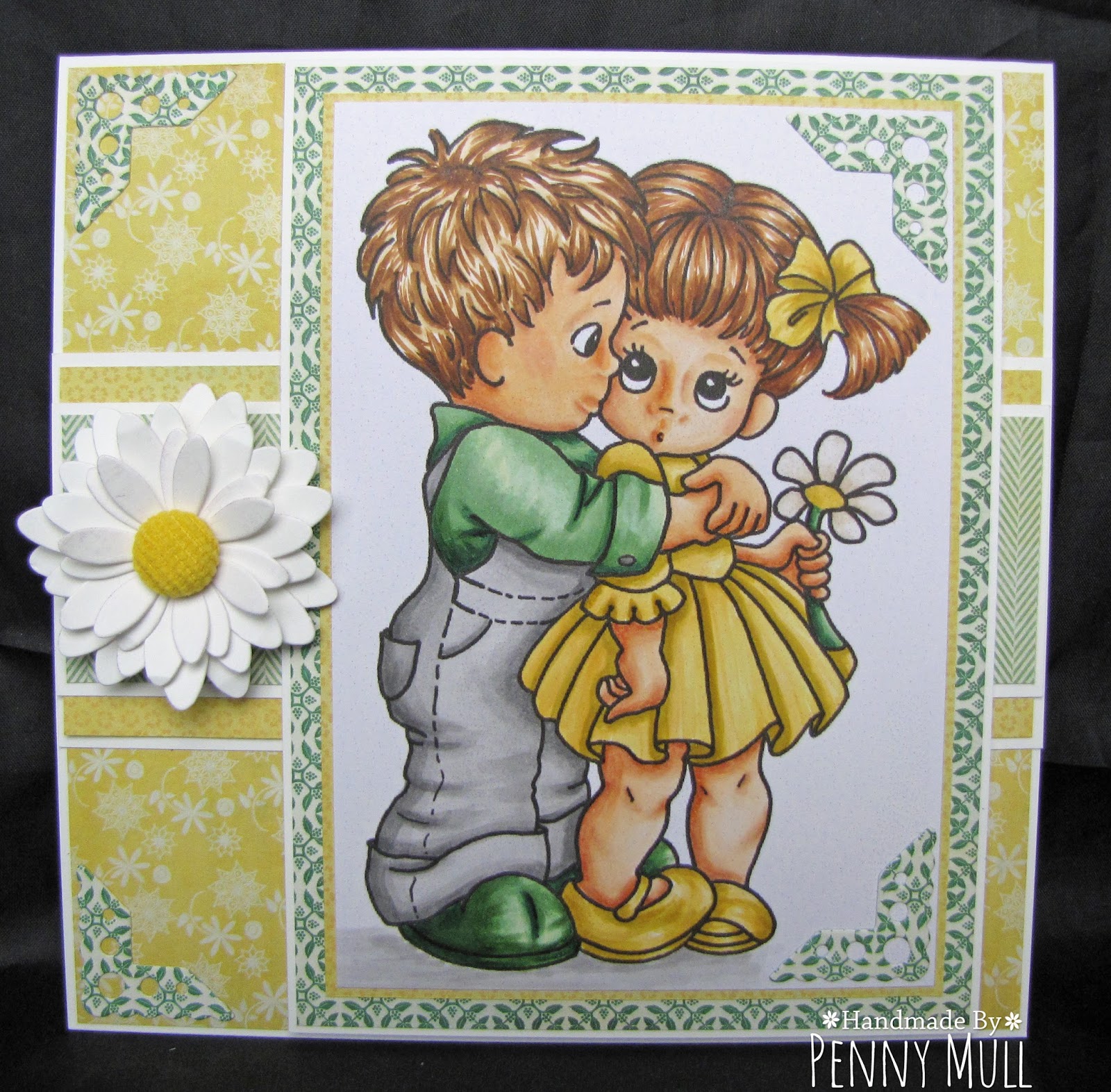