The Outlawz Friday Coloring "Anything Alice in Wonderland" Challenge

Wow, I am actually writing this on a Friday morning! I had such a weird week that I didn't get my card done until the last minute, and then couldn't drag myself to the computer to write up a post. So, I am late posting my card. Fifty lashes with a wet noodle...

Let's see, what momentous things happened since last Friday? We got our new iPhones! Yes, indeedy, and now I am synced with my computer. Lovin' that! There was a slight bug, which Apple thinks they fixed. I surely hope so. Our phones kept dropping wifi at home to go to 4G. And that costs data. It appears that my phone is staying on wifi at home. Hope so! Anyway, I love my new phone.

And we continued to watch Don like a hawk so he didn't pull out his sutures. On Sunday, we took him to Merrilyn's in the morning, and then headed out to the football stadium. After more than a week of constant vigilance, it was such a relief to have someone else worry about his hairy little head.

At the stadium we got out of our car and walked to security to be checked out. OMG! Everyone parked in that row on both sides was from San Francisco. I knew we were in trouble with the noise they would generate inside. (Yes, we do have an indoor stadium, with a retractable roof. You don't expect those big kids to play pro football in 105 degrees outside, do you? Imagine the sweaty stench. Oooh, I'd rather not. And I want to enjoy the game in air-conditioned comfort, too!) Anyway, there were far too many 49ers' fans at the game; and, yes, they did make way too much noise when we had the ball. Our team had to go to a silent snap count in our own stadium. I just wish all those season ticket holders who sell their tickets to the opposition would cut it out. Dagnabit...

Even though our team was handicapped with the noise, we made it worse on the 49ers. We were rocking the noise, and our team was rocking the players. Holy moly, Rocky! We won 47-7, in case you hadn't heard. Not that you care, but it was the best game I have ever been to. Loved every minute of it, and stayed until the end, including the coach's interview. Then we headed to Tempo Urban Bistro in Verrado, which is in Buckeye on the west side. You know, like halfway to California.

We had the best meal that night! It was the last day of Restaurant Week, and we actually got to eat at a participating restaurant once! Better than not at all. I forgot to take photos with my new phone. Bummer. I can't believe it. (Has nothing to do with my age. That's my story, and I'm stickin' to it!) I had a first course of the most delightful brussel sprout salad. With caramelized butter nut squash, quinoa, parmesan cheese shavings, and toasted pumpkin seeds! Loved it! Gary had their blue masa fried rock shrimp. I tried one and it was delicious! Then we both had Filet of Beef Wellington, with mushroom duxell, caramelized leek demi-glace, baby potatoes and carrots. Holy cow! (No pun intended!) I had never eaten Beef Wellington, so really wanted to try it. So glad I did. We both loved it! Couldn't finish all my potatoes, though. I was already full and we still had dessert coming. And what a dessert! I had the caramel apple tart, which literally melted in my mouth. Oh, baby! Gary had the molten lava brownie, which was wonderful, but not as good as my tart! With a great glass of wine during the meal and a cappuccino afterward, it was as perfect as it could be. Just too. much. food. I was uncomfortably stuffed. Should have known better, hey? I would love to go back to that restaurant, but it is 1-1/2 hours from our house, so probably won't go again real soon. But it made for a great night.

We didn't pick up Don until Monday, as he had a sleep-over while we stayed at the Westin in downtown Phoenix for the night. Was quite funny walking into the hotel with our Cardinals jerseys on, since we saw several 49ers fans in their jerseys. I am sure they weren't happy to be reminded of the butt-kickin' their team had just received. And, no, we didn't say anything. Didn't even make eye contact. Hey, I am old, female, and weak. No way am I going to get into a physical altercation over football...or anything else, for that matter.

So, on Monday, Don got his sutures out. And then we were supposed to go to lunch with Merrilyn and Ron, (sister and BIL). Well, Ron was at Goodyear getting a new battery put into their Trooper. We were going to pick him up, but he called as we were on the way to say he would meet us at the restaurant since the Trooper was ready to go. Ok, fine. But he didn't show, he didn't show, and finally Merrilyn got him on the phone. Someone had rear-ended him on the way to the restaurant. So we grabbed our drinks and hot-footed it to the scene of the crash. Good thing he was in the Trooper--it's an SUV, so he didn't get hurt badly. Sore neck, but OK. After all the paperwork was filled out, we followed him home and then drove him to the restaurant, Little Thaiger. Which has very good food, btw. Strangest lunch I have had in a long time, though. Drove Ron and Merrilyn back home, got Donovan, and headed out to our house. Longgggg day!

I think I spent most of Tuesday recovering from the weekend and Monday. (You know, it takes a while for old people to recover from so much excitement.) Then I had an eye appointment on Wednesday, which wrecked my eyes for hours. You know how that goes. Really makes it hard to see with the dilation, and impossible to color. So I didn't get my card done until late Thursday. Oh, hey, my eyes didn't change much at all. Not enough to warrant new glasses. But I did get new prescription sunglasses, as mine were a couple of prescriptions old--and hard to see with. The frames Gary and I picked out, (yes, he had input as usual), are really, really big. And the lenses that were in them were reflective. So when I tried them on I looked like a grasshopper.

But the gals at Aztec Optical are so much fun and so helpful, that they put regular sunglass lenses in the frames, and then they looked nice on me. And they are a turquoise-ish frame, which Gary loves on me. So I am getting those with Polarized lenses. I will finally be able to see to drive again. (Yes, it has been dangerous for other drivers when I have been on the road. Of course, just because I will be able to see again doesn't mean that you people will be any safer when I am driving. Good luck to you.)

I did find out that the reason I thought I needed new glasses is because my retinas are wrinkling. Just like my corneas have. Hey, what is it about getting old that causes wrinkles all over your body? Even in places you can't see without x-rays? I bet my organs are wrinkled. Guess I need to invest in a new iron...

Okey dokey, I think I have you caught up with the exciting events in my life, such as they are. So I will move on to my card for the week.

Our sponsor this month is once again Sweet Pea Stamps! YAY! So happy! And our lucky winner will win his/her choice of three digis! I so love perusing their store--so many wonderful artists with tons of fabulous images!

In honor of Mad Hatter Day, October 6th, I chose an actual Mad Hatter image. You can choose anything from the Alice in Wonderland tale. (Just be sure to hand-color your image, with your choice of medium.)  My image is from Make it Crafty, called The Mad Hatter. I printed him on X-Press It BC, and colored him with my Copics:

My DP is from the Carta Bella Well Played collection, and it was paired with Stampin' Up CS. I used some die cuts on my card, made with Spellbinders Feathers on the Wind and Cheery Lynn Mini Playing Cards dies. And that does it for another week!

Please visit us at The Outlawz Friday Coloring Challenge, and check out the fab creations by my talented teammates: Carla, Kathi, and Vanessa! Looking forward to you playing along with us this week.

We are headed to another Cardinals game in Glendale on Sunday. This time we play the St. Louis Rams. I doubt that we will blow them out, but I certainly hope that we win to make out record 4-0! Hope you have some fun plans, too! 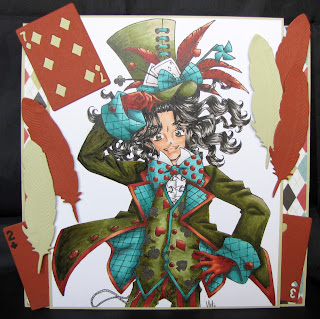