Don't faint! It's really true! I actually created a CAS card. It was agony, I tell ya. Agony! I so desperately wanted to add a little of this, or a lot of that. I had to slap my own hands, (and that hurt), to keep on the straight and narrow. But keep on it, I did. Oh, good grief, I sound like Yoda now--and Charlie Brown. (help.)

This week is the 2000 Member Party for The Outlawz. If you haven't yet checked them out, please do so. They are a wonderfully diverse and fun group, founded by Colleen Holmes, and they have several challenges each week to try. For this party, there are games to play and new challenges for each of their groups. That's where my CAS card comes in. I decided to make one for the CAS party challenge, which is a summer theme.

Before I give you the details on my card, I wanted to update you on Donovan. He is such a little trooper! I am so proud of him! He is doing really well with all the exercises, except figure-eights and circles. Those he doesn't really enjoy, probably because we do them outside in a raging inferno. It is too hard to move him in those patterns on our tile floor in our air-conditioned house. But the treats seem to be helping to guide him around in those patterns, and I expect he'll manage them well enough soon. (Well, at least I hope he does. Because taking him for a drag around the yard is not my idea of a good time, if you know what I mean.)

Sunday we went to another Diamondbacks game. Sat in the Diamond Level again, but we bought our food on the main concourse. I had an OK turkey burger, and some to-die-for kettle corn. OMG! It was warm and gooey and sweet and salty and crunchy and delicious! I will get that the next time we go, and every time after that! Oh, and our D-backs won again, btw. But that's not the reason I mentioned the game. I mentioned it because I didn't get Don's exercise in until after we got home from the game.

That wouldn't be a big thing, but it meant that he had to have his swim very late--like about 9:30 p.m. And that wouldn't be a big thing, except he had to go for a walk at midnight. He was so terribly tuckered out from his tub swim, (and I did put more water in the tub, which helped somewhat), that he ran out of steam before we finished his walk. He was trotting along pretty good, and then, all of a sudden, we were moving soooooo slooooooowly. I felt like a snail. It is really hard to walk like that! So, when he finally finished his 10 minutes, I scooped him up and nearly ran the rest of the way home. And if you believe that, I have a bridge to sell you. Me, run? Are you kidding? Especially in 99 degrees. Which it was. At midnight. Probably another reason Don pooped out on me. Well, not literally, but you get my drift, right?

Alright, I'll stop this drivel and give you the deets on my card. I chose an image by MayzyArt called "Sandy", which I paired with a Create with TLC sentiment. I printed both digis on X-Press It blending CS. I chose Stampin' UP CS and inks to use for a brayered background. I sponged the sentiment with SU ink after I cut it out with a Spellbinders die from the Labels 22 collection. Sandy was colored with Copics, and then I accented her with Copics Opaque White. I also used some Stickles on the star and shell of the sand castle, and some Glossy Accents on Sandy's lips, earring, headband, and eyes. I cut Sandy out, vewy cefuwy, (OK, name that cartoon character), and popped her up on the background. (It didn't hurt her too much.) I also popped the TLC sentiment and voila! An actual CAS card!

I am entering this card into the following:

Have a great week, everybody! And be sure to stop by The Outlawz for their party! 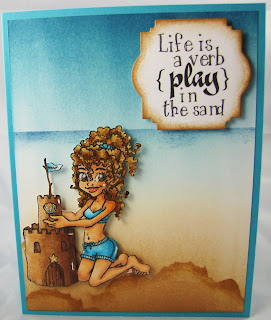