I don't know if I have told you about my eyes. They're fairly small, blue, and one eyelid hangs lower than the other. Uneven eyes. But that's not important right now. What is important is that I don't see well enough to stay within the lines when coloring unless I use a magnifying light source. And I have one of those. I bet you know where this is going already, don't you?

Yup. As I was coloring the image for Carol's card on Thursday, the light bulb burned out on my magnifying light. This was another one of those wonderful "%^$&**#$%$^%#**#&$*#&$**#&#^#%" moments. You see, I did not buy a spare bulb when I bought the lamp. And why not? Don't ask me. Ask my dim-wit alter ego. I have no idea. (I have realized that I am not the brightest bulb on the planet--every pun intended.) OK, so now what? Well, I had to use another desk lamp while looking through the magnifier, which really didn't work very well. I am telling you this because this image is not my best work. But, it will have to do. Because my new bulb wouldn't arrive in time to finish this card.

I needed the card to be done by today so I could give it to Carol tonight at dinner. We'll be seeing Carol and her hubby, John, at the dinner club get-together tonight in Scottsdale. Apparently we are eating at a bank. Or what used to be a bank. It's called The Mint. I'm intrigued to try it, and, of course, I will report back with another of my alter egos, the food critic. Honestly, I have so many alter egos I think I have multiple personality disorder. But that's not important right now either.

On to the card. (Minus the coloring, if you don't mind.) Carol is such a dear friend of ours. We have known her hubby, (John), since he, Gary, and I went to the U of Minnesota back in the 70's. That was after John and Gary got out of the military and went to college on the GI bill. When Gary graduated we moved out to AZ, and I finished school at ASU. John was six months behind Gary in school. When he graduated he moved out here, too. And Carol and John found each other again, (long story) and got married. And then Gary and I met Carol. And Bob and Ted and Alice. Oh, no, not really. Just Alice. No, not even her. Just John and Carol. (Anybody remember that movie besides me?)

Carol is a regular nut. As opposed to being an irregular nut. She has a crazy sense of humor, which is no doubt why we get along so well together. And we share a love of jewelry that knows no bounds. Which is why I chose this Create with TLC sentiment for her card. Even before I chose an image. I just knew that the sentiment totally fit her, (and me, but that's beside the point). Oh, and it cracks me up. And I digress again. Sigh...

Back to the card: my design is based upon a sketch from Sweet Sketch Wednesday: 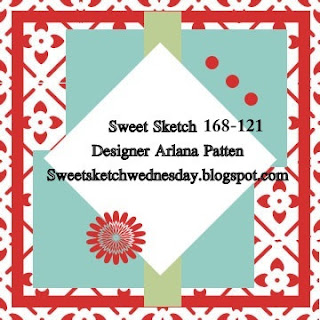 I picked a Saturated Canary image called "Fancy", (which I think was once a freebie), to go with this sentiment. I knew I could sparkle her up for Carol. (Yeah, that was before my light burned out. Hard to sparkle with a Spica pen and Stickles when you can't see what you are sparkling. But I digress yet again. So sorry.)

I printed Fancy on Copic X-Press It CS. The rest of the CS is from Stampin' Up. My DSP is from the BoBunny Smoochable Collection. I used several dies on this card: Spellbinders Classic Squares and Lacey Circles, Cheery Lynn Sofia's Heart Doily and Lace Corner Deco B, MFT small leafy flourish, Magnolia Doohickey flourish, and Memory Box Tender Leaves. The flowers are from Maya Road Trinkets Ruffle Blossoms. The stick pins are from Wild Orchid Crafts. I have added a Tim Holtz Bauble and some tiny charms I had in my stash. I colored some ribbon and lace with my Copic inks and added them along with a bit of tulle. Stickles were used on the circle, the corner die cuts, and the dots in Fancy's hair. A clear Copic Spica pen was used on her lips and the daisy-like flowers on the image. I applied Glossy Accents to her eyes and accented her with a white gel pen. I rubbed a little SU ink around the image. The image was colored (!**&*&!*&^%*&^%$**) with my Copics: G40, G43, RV0000, RV21, RV23, E000, E00, E11, E53, E55, E57.

I am entering this card into a few challenges, just because so much eye-strain went into it. They are:

Hope you are having a great weekend! 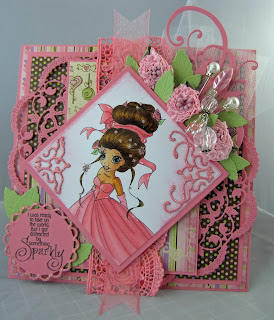