I have finished another card for Merrilyn to take to the Midwest on Tuesday. That's card #2--Jim's birthday card. (Jim is the boyfriend of my sister, Barbara.) I have one card left to make. The only way to make sure I finish that one on time, (by Monday evening, so I can get it to Merrilyn before her trip), is to work into the wee hours again today. I did that Friday night on Jim's card. I worked until 4:30 a.m. and then had a small catastrophe. (Is there such a thing as a small catastrophe? By their very nature, aren't catastrophes rather large?)

Would you like to know what happened? Tough, I'm going to tell you anyway. I should warn you that this paragraph is x-rated. So cover your eyes while you read it. I had many of the card elements sitting on my desk in front of me. I picked up one of them to distress with my ink pad. So far, so good. I picked up the ink pad. OK, still doing fine. Then I started to distress the paper and I. dropped. the ink pad. Upside down. On my card elements. Oopsie daisy. Oh, of course, that's not what I said! What I did say was $%$^*&#^$%$^&%&^*^*!!!!

And then I went to bed.

Hours later I got up, took my blood pressure medication, and then went back to my craft room to survey the damage. Yup. One ruined image. Which really ticked me off, because I had already discarded two versions of that image fully colored. Let's see--I believe that means that I had to print and color the image for the FOURTH TIME, PEOPLE!!!! Oh, so sorry, I didn't mean to shout at you. (Yes. Yes, I did. I had to expel that negative energy somehow.)

OK, so I had to print and color the image again. I had also ruined a couple of die cuts, so I had to cut those out again. And I got ink on the farm image I had stamped and die cut. I refused to redo that one. Instead, I eventually pop-dotted the little farmer on top of the smeared area. Voila! A mistake with an easy correction. How terribly odd.

I must get on with things so that I can go make my last card. Therefore, without further ado, or angst, here is my recipe for this travesty card.

The design is loosely based on a sketch from Divas by Design Sketch Challenge, which I intend to enter. I rotated the sketch and then took some liberties with it that I hope are acceptable. And here is the sketch: 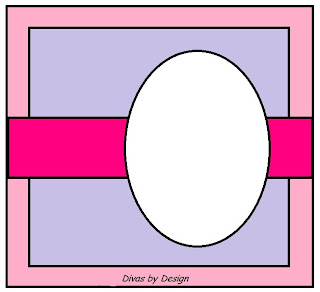 I am also entering the Digi Doodle Shop Challenge Use a Charm, which I thought they could rename "Be Charming", because that has such a clever ring to it, don't you think? Oh, whatever.

I chose the Bugaboo Bobble Head Farmer for my image. Why did I pick a farmer? Why, I am so glad you asked that question! I picked a farmer because that is what Jim is. A farmer. In Wisconsin. Next question. Where did I get the clever sentiment? I got it from Create with TLC. OK, enough with the question/answer session. It's really adorable of you, but it takes too long, and I am in a hurry.

I printed both the image and the sentiment on Copic X-Press It CS. Then I picked DSP from Authentique's Splendid Collection and My Mind's Eye Lost and Found Sunshine collection. I love it when you can use paper from more than one source. I used Stampin' Up CS for my base and die cuts, except the tickets. They were made from Bazzill Kraft CS. (I bought some Whimsy stamps and a Whimsy ticket die so I could make my own tickets. I am really tickled with them. You should get some if you don't already have them. Really. You'll be happy you did.)

I die cut the wheat flourishes, (wheat, get it? for a farmer? Oh, well, I thought it was clever at the time), with a Marianne Designs die. All the ovals are die cut from Spellbinders dies. The corner flourish was cut from a Cheery Lynn Lace Corner Deco B die. The farm scene came from a stamp by Northwoods Rubber Stamps. The Celebration piece is from 7 Gypsies. The charms are from my stash. The safety pin and brad are from Stampin' Up. And the little paper clip is from Tim Holtz. I used a bit of burlap from my fabric stash.That should about do it. Uh, not quite.

And yes, the farmer does have gray hair--I was not trying to color it black. Jim is an older man, with lots of gray hair, unlike my Gary. Who is an older man with almost no gray hair. Because he is bald, not because his hair hasn't turned gray. Well, actually he isn't totally bald. But he does shave his head, so he appears totally bald. Aren't you glad I cleared that up for you?

Have a lovely Sunday/Monday! 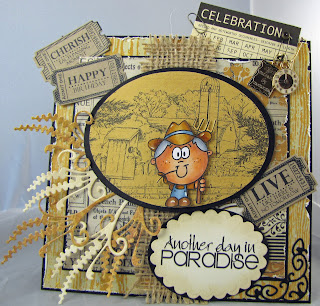