This is the second installment of my GDT at Jellypark Friends Friday Challenge. Our last challenge--Back to Nature--was not really me. As I explained two weeks ago, "Nature Girl" I'm not. However, "I'm Hungry" is right up my alley. It's in my wheelhouse. It's my middle name. It's who I am. It's my essence.

I love good food. (Who am I kidding? I love food, period.) Which reminds me--I am still eating Amy's frozen entrees. For an entire week now. It has gotten really boooooring. But Gary comes home from England tonight, thank heavens! Not in time for dinner. Well, actually, in time for a very late dinner, but I know my hubby. He will be so exhausted, so jet-lagged, that he will not want to go out to eat. He will just want to come home. And probably fall right into bed--preferably on his side. And he'll sleep for hours. At least we will go out to eat tomorrow night.

But first, I get to go out to eat for lunch today. With my sisters. It was Barbara's turn to decide where to eat. So we are going to meet at Cornish Pasty Co. Yes, I did just talk about it this last week. And my sister reads my blog, and became hungry for the food there. Don't know if I will have a pasty or their fabulous mushroom, walnut & spinach soup. Probably the soup. Because then I will still have room for dessert--they make a wonderful sticky toffee pudding. (The only version that I have had that is better than Cornish Pasty's is the one at St. Francis in Phoenix.) Now doesn't that sound like a great lunch? Real food. I can hardly wait.

Oh, and on Sunday our dinner group is going out to eat. For lunch. Which could also be called dinner by certain people. And then they would call the evening meal supper. But I call lunch, lunch; and dinner, dinner. Anyway, we're going out for lunch with the dinner club. Is that clear as mud? I thought so--it is to me. Can you tell I have spent a week conversing mainly with Donovan, the demented dog? He has destroyed what little clarity I had left. With his endless trips outside. I am so tired of them.

Oh, and did I mention Donovan's sense of humor? It sucks. When he is through outside, he claws at the back door. Well, I guess he doesn't really have claws; he is a dog, after all. He has nails. So he nails at the back door. That sounds stupid. No wonder everyone says a dog claws at the door. Or do they? An inquiring mind has a need to know. Or not.

Where was I? Oh, yeah, Don's sense of humor. It still sucks. He "claws" at the door to come in; then, when I open the door for him, he runs away. And turns around in circles. If I step outside, he runs further away from me. Don't laugh. It's not funny. Even if Donovan thinks it is. Especially when I am in the middle of a card. Or a TV show I am watching while working on a card. And I miss the end of the show. Which has happened. More than once. Like I said, Don's sense of humor sucks. Rotten eggs.

It's a wonder I don't sound like a blithering idiot by now. Cuz I don't. Much. If anyone out there wants a slightly-used, 6-year old Maltese, let me know. I am ready to trade him in. On a stuffed animal. One that doesn't eat, pee, poop, have knee problems, or swallow whole dental chews. As long as the stuffed animal isn't a sock monkey. I can't abide sock monkeys. They give me the creeps. Terrible creeps--and I cannot tell you why. Nor do you care.

Anyway, I was telling you that I love good food, and food, in general. So I thought it would be easy for me to make a card to fit today's theme. Ah, apparently not so much. Turns out, I went off the deep end again. Couldn't stop myself. Heavy sigh....

For my image I chose the sweet, (food reference pun intended), Jellypark Just for You Tag, which I printed on Make It Colour CS. And I had this vision in my head about using lots of tags on the card to go with the image. So I did. Like I said, I overdid it just a tad. Oh well....

My DP was chosen from the Prima Almanac collection. I distressed the DP with my Zutter Distrezz-It-All and sponged the edges with Stampin' Up ink. I combined it with Stampin' Up CS for the card base, die cuts, and tags. I printed a Create with TLC sentiment on one tag, stamped a Stampin' Up Teeny Tiny Wishes sentiment on another, and stamped a SU Sweet Little Sentiments stamp on a third.

The tags were tied with Copic-dyed ribbon, lace, or tulle. I added MS Pearl Stickers to three of the tags, including the image. I layered the DP with tags stuck behind the layers.

Like I said, I went nuts, (food reference pun also intended), again with this card. Sometimes I just can't help myself. CAS I am not.

Looking forward to seeing what you create. Be sure to check out the fab DT creations! 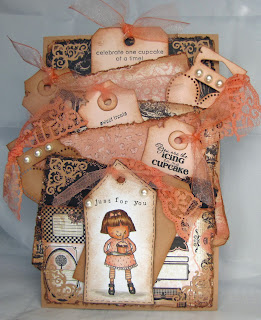