The Outlawz Greeting Card "Thank you Beary Much!" Challenge

Howdy, again! This week we are looking for you to create a thank-you card that features a bear somewhere on the card. As you will see below, I took this quite literally. Imagine that.


Our special sponsors this month are:

I mentioned that we had quite a weekend planned. But, of course, not everything went according to plan or schedule. I wouldn't know how to handle life if it was neatly packaged, you know what I mean?

I had a lovely lunch with my sister, Merrilyn, on Friday. She suggested a new place, which was supposed to be a second location of a restaurant we really liked. But when we got there, it was a different establishment entirely. I have to say, I was not surprised, Merrilyn. (Clearing throat and running away now.) However, it was a delightful little cafe, which serves up healthy salads and sandwiches for the spa people in the same building. The spa people. Kind of like the pod people, only different. Never mind. Anyway, we had tuna salad sandwiches, which were the best I have ever eaten. Scrumptious! Mixed with cottage cheese, instead of mayo, and loaded with avocado and grapes. It was a lovely mix and served on toasted bread. Mmmm, mmmm, good. And it came with a delicious tabbouleh salad. How lucky can you get to stumble into such healthy goodness? I requested a Chai tea latte, iced, which was a mistake. It tasted delicious, but I should have had it served hot, as it was a chilly, rainy day, and I was freezing from eating & drinking cold items.

Anyway, I then went back home to pack up and get ready for the Christmas party & big weekend at the Sheraton Wild Horse Pass Resort. I did pack, but forgot some things--nothing major, but irritating when I discovered later that they were still at home. However, Gary did forget major things, like his jeans for Saturday and his medications, which meant that we would have to hightail it back home on Saturday morning. That was not in the original plans. He did manage to cancel the Saturday night reservations, which was good, so we only stayed the one night.

The party was really fun; I enjoy seeing his co-workers & the spouses once a year. Gary is the old man of the group, so most of these people are young, and quite agile on the dance floor. They are great fun to watch. Yes, we did dance a few times, and Gary insisted upon doing some swing. Which he regretted the next morning, because his repaired shoulder was really aching. I tried to tell him Friday night that it was too soon to swing dance, but he would not listen. So pardon me, if I felt no sympathy for him the next day. (Stubborn old goat.)

That was the best banquet buffet I have ever had. They put fabulous food out, so many different dishes, and each one was wonderful. The hot foods were hot and the cold foods were cold. How about that--and there was enough for everyone--even our table, which was served last. (Every year I sit at the table which gets to go for food at the end. Why, I have no idea. But it has become a standing joke.) I had flank steak, salmon, root veggies, whipped sweet potatoes (heaven), delicious salad, some unusual, but best-ever croutons, creamy grits, and great mushroom ravioli. Yes, I had almost too much to eat, although I took small portions of everything. And then I ended my meal with a chocolate-covered-whipped-peanut butter-candy. Oh, my. And the meal included a free glass of very good Cabernet Sauvignon. And coffee or tea to drink with dessert.

Then they had a drawing for prizes, and Gary won a wireless Sony Blue-Ray Disc/DVD Player! That was rather exciting! He hadn't won anything for several years, so I think that really made his evening!

At 10:00 the party ended; those people who wanted to went to the casino. We old folks just went to bed, since we were tuckered out. But we didn't get very good rest. We were next to the room with the ice machine, (lovely rumbling all night long), which was next to the elevators. People were coming off those elevators at all hours of the night from the casino--and they were unbelievable loud. Lucky us.

So I was awake every hour from 11 to 6 and finally got up at 6:30 a.m. We got ready and met friends, Catherine & Jose, for breakfast in the Ko'sin restaurant. This also had great food, and a breakfast bar, which I took advantage of. I got smoked salmon, a danish, fruit compote, some scrambled eggs & roasted potatoes. Soooo good. Since I don't usually eat breakfast, this was a really nice treat.

Then we checked out, came home, Gary took his meds, and I got a little blog commenting done. He ran some errands, and when he came back, we went to Mesa, as we had Brynn's birthday party at 2:00 p.m. She received some wonderful gifts, there were some lovely bits to nibble on, and it was a really relaxing party. We left there and headed up to Scottsdale for dinner at the Westin Kierland Deseo Restaurant with friends, Jon and Carol. Deseo serves Latin American cuisine. We had fantastic lobster ceviche; a great side dish of quinoa, spinach, golden raisins, pine nuts & pears--yummy; and I had jumbo shrimp in an enchildo sauce, which I can only describe as spicy, tomatoey, and quite heavenly. Gary had grilled skirt steak, which I sampled, and it was also delicious. I had Earl Grey tea for dessert, as I was full--I had eaten more in two days than I did almost all week! I rolled myself into bed exhausted that night, and slept like the dead. Gary said I was snoring like mad, too.

Yesterday he finally awakened me at 10:30. Yes, a.m., but that was bad enough! I had a card to make and photograph, as I hadn't managed to get around to it on Thursday night. So I chose a very nice, but simple, sketch to do from Friday Sketch Challenge. I needed something I could create quickly. (For me, anyway.) 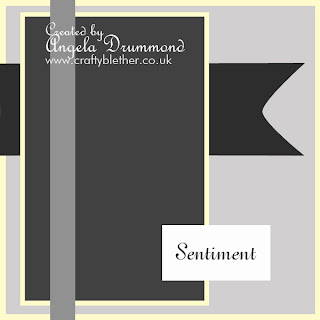 Then I needed the bear image, and I remembered the new one from Jellypark Friends, called Bear with Star. I figured I could color him up quickly, and paper-piece his star to use for the sketch. It all came together in one afternoon, which is simply amazing for me!

I printed the image on Cryogen CS and colored it with Copcs: E07, E41, E42, E43, E44. Then I die cut it with a Spellbinders Grand Labels 11 die, and used a larger GL 11 die to create a mat. I used Stampin' Up CS paired with DP from the Basic Grey Life of the Party collection. I edged my papers with a bit of SU ink. My sentiment is from Create with TLC and is die cut with a Spellbinders Classic Rectangles die. To finish the card I added some lace trim and a button from my stash. Easy peasy.

I am trying to work my way through everyone's blogs, so be patient with me as I catch up. Have you got your holiday shopping done? I have no idea how I am going to finish mine on time, as I still have more Christmas cards to make. Sigh.....

Hoping you find a few minutes to create a card and play with us this week.

Before I go, I just want to mention that Gary and I were deeply affected by the Newtown tragedy, as I am sure you were; we are parents and grandparents and just cannot imagine the pain of losing a child to violence--we don't want to imagine it. But we so wish we could ease that pain for the families. We send our heartfelt wishes that the anguish will eventually lessen. Sending everyone involved giant virtual hugs. 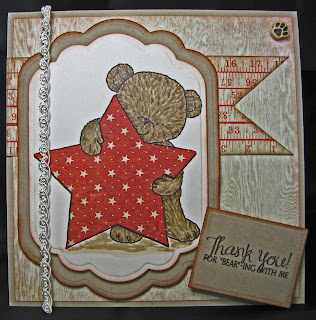